Teletubbies vs Emu in Christmas battle 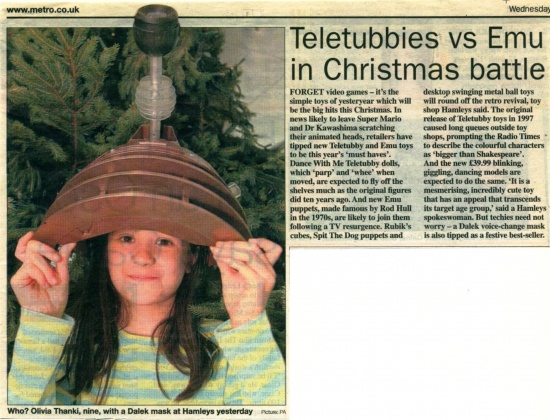 FORGET video games — it's the simple toys of yesteryear which will be the big hits this Christmas. In news likely to leave Super Mario and Dr Kawashima scratching their animated heads, retailers have tipped new Teletubby and Emu toys to be this year's 'must haves'. Dance With Me Teletubby dolls, which 'parp' and 'whee' when moved, are expected to fly off the shelves much as the original figures did ten years ago. And new Emu puppets, made famous by Rod Hull in the 1970s, are likely to join them following a TV resurgence. Rubik's cubes, Spit The Dog puppets and desktop swinging metal ball toys will round off the retro revival, toy shop Hamleys said. The original release of Teletubby toys in 1997 caused long queues outside toy shops, prompting the Radio Times to describe the colourful characters as 'bigger than Shakespeare'. And the new £39.99 blinking, giggling, dancing models are expected to do the same. 'It is a mesmerising, incredibly cute toy that has an appeal that transcends its target age group,' said a Hamleys spokeswoman. But techies need not worry — a Dalek voice-change mask is also tipped as a festive best-seller.

Caption: Who? Olivia Thanki, nine, with a Dalek mask at Hamleys yesterday