Television in the Service of Science Fiction 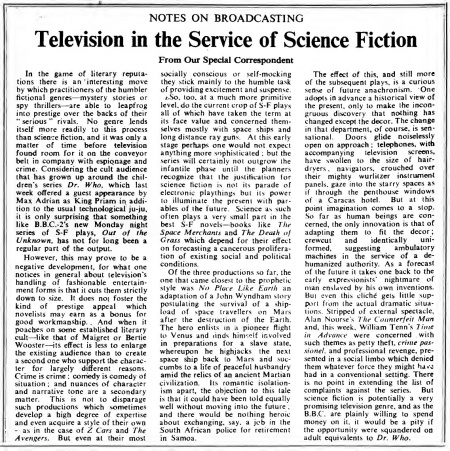 In the game of literary reputations there is an interesting move by which practitioners of the humbler fictional genres—mystery stories or spy thrillers—are able to leapfrog into prestige over the backs of their "serious" rivals. No genre lends itself more readily to this process than science fiction, and it was only a matter of time before television found room for it on the conveyor belt in company with espionage and crime. Considering the cult audience that has grown up around the children's series Dr. Who, which last week offered a guest appearance by Max Adrian as King Priam in addition to the usual technological, ju-ju, it is only surprising that something like B.B.C.-2's new Monday night series of S-F plays, Out of the Unknown, has not for long been a regular part of the output.

However, this may prove to be a negative development, for what one notices in general about television's handling of fashionable entertainment forms is that it cuts them strictly down to size. It does not foster the kind of prestige appeal which novelists may earn as a bonus for good workmanship. And when it poaches on some established literary cult—like that of Maigret or Bertie Wooster—its effect is less to enlarge the existing audience than to create a second one who support the character for largely different reasons. Crime is crime ; comedy is comedy of situation ; and nuances of character and narrative tone are a secondary matter. This is not to disparage such productions which sometimes develop a high degree of expertise and even acquire a style of their out -- as in the case of Z Cars and The Avengers. But even at their most socially conscious or self-mocking they stick mainly to the humble task of providing excitement and suspense.

So, too. at a much more primitive level, do the current crop of S-F plays all of which have taken the term at its face value and concerned them-selves mostly with space ships and long distance ray guns. At this early stage perhaps one would not expect anything more sophisticated : but the series will certainly not outgrow the infantile phase until the planners recognize that the justification tor science fiction is not its parade of electronic playthings but its power to illuminate the present with parables of the future. Science as such often plays a very small part in the best S-F novels—books like The Space Merchants and The Death of Grass which depend for their effect on forecasting a cancerous proliferation of existing social and political conditions.

Of the three productions so far, the one that came closest to the prophetic style was No Place Like Earth an adaptation of a John Wyndham story postulating the survival of a shipload of space travellers on Mars after the destruction of the Earth. The hero enlists in a pioneer flight to Venus and finds himself involved in preparations for a slave state, whereupon he highjacks the next space ship back to Mars and succumbs to a life of peaceful husbandry amid the relics of an ancient Martian civilization. Its romantic isolationism apart, the objection to this tale is that it could have been told equally well without moving into the future and there would be nothing heroic about exchanging, say. a job in the South African police for retirement in Samoa.

The effect of this, and still more of the subsequent plays, is a curious sense of future anachronism. -One adopts in advance a historical view of the present, only to make the incongruous discovery that nothing has changed except the decor. The change in that department, of course, is sensational. Doors glide noiselessly open on approach telephones, with accompanying television screens, have swollen to the size of hairdryers ; navigators, crouched over their mighty wurlitzer instrument panels. gaze into the starry spaces as if through the penthouse windows of a Caracas hotel. But at this point imagination comes to a stop. So far as human beings are concerned, the only innovation is that of adapting them to fit the decor ; crewcut and identically uniformed, suggesting ambulatory machines in the service of a de-humanized authority. As a forecast of the future it takes one back to the early expressionists' nightmare of man enslaved by his own inventions. But even this cliché gets little support from the actual dramatic situations. Stripped of external spectacle, Alan Nourse's The Counterfeit Man and, this week. William Tenn's Time in Advance were concerned , with such themes as petty theft, crime pas-stone'. and professional revenge, presented in a social limbo which denied them whatever force they might have had in a conventional setting. There is no point in extending the list of complaints against the series. But science fiction is potentially a very promising television genre, and as the B.B.C. are plainly willing to spend money on it. it would be a pity if the opportunity were squandered on adult equivalents to Dr. Who.