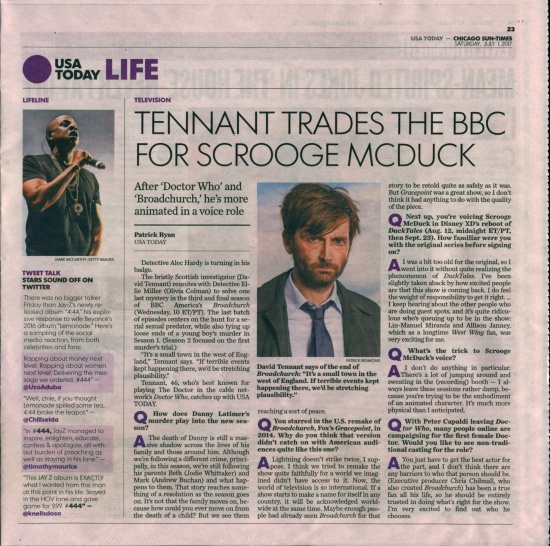 After 'Doctor Who' and Broadchurch,' he's more animated in a voice role

Detective Alec Hardy is turning in his badge.

The bristly Scottish investigator (David Tennant) reunites with Detective Ellie Miller (Olivia Colman) to solve one last mystery in the third and final season of BBC America's Broadchurch (Wednesday, 10 ET/PT). The last batch of episodes centers on the hunt for a serial sexual predator, while also tying up loose ends of a young boy's murder in Season 1. (Season 2 focused on the first murder's trial.)

"It's a small town in the west of England," Tennant says. "If terrible events kept happening there, we'd be stretching plausibility."

Tennant, 46, who's best known for playing The Doctor in the cable network's Doctor Who, catches up with USA TODAY.

How does Danny Latimer's murder play into the new season?

The death of Danny is still a massive shadow across the lives of his family and those around him. Although we're following a different crime, principally, in this season, we're still following his parents Beth (Jodie Whittaker) and Mark (Andrew Buchan) and what happens to them. That story reaches something of a resolution as the season goes on. It's not that the family moves on, because how could you ever move on from the death of a child? But we see them reaching a sort of peace.

You starred in the U.S. remake of Broadchurch, Fox's Gracepoint, in 2014. Why do you think that version didn't catch on with American audiences quite like this one?

Lightning doesn't strike twice, I suppose. I think we tried to remake the show quite faithfully for a world we imagined didn't have access to it. Now, the world of television is so international. If a show starts to make a name for itself in any country, it will be acknowledged worldwide at the same time. Maybe enough people had already seen Broadchurch for that story to be retold quite as safely as it was. But Gracepoint was a great show, so I don't think it had anything to do with the quality of the piece.

Next up, you're voicing Scrooge McDuck in Disney XD's reboot of DuckTales (Aug. 12, midnight ET/PT, then Sept. 23). How familiar were you with the original series before signing on?

I was a bit too old for the original, so I went into it without quite realizing the phenomenon of DuckTales. I've been slightly taken aback by how excited people are that this show is coming back. I do feel the weight of responsibility to get it right.... I keep hearing about the other people who are doing guest spots, and it's quite ridiculous who's queuing up to be in the show: Lin-Manuel Miranda and Allison Janney, which as a longtime West Wing fan, was very exciting for me.

I don't do anything in particular. There's a lot of jumping around and sweating in the (recording) booth — I always leave these sessions rather damp, because you're trying to be the embodiment of an animated character. It's much more physical than I anticipated.

With Peter Capaldin leaving Doctor Who, many people online are campaigning for the first female Doctor. Would you like to see non-traditional casting for the role?

You just have to get the best actor for the part, and I don't think there are any barriers to who that person should be. (Executive producer Chris Chibnall, who also created Broadchurch) has been a true fan all his life, so he should be entirely trusted in doing what's right for the show. I'm very excited to find out who he chooses.

Caption: David Tennant says of the end of Broadchurch: "It's a small town in the west of England. If terrible events kept happening there, we'd be stretching plausibility."