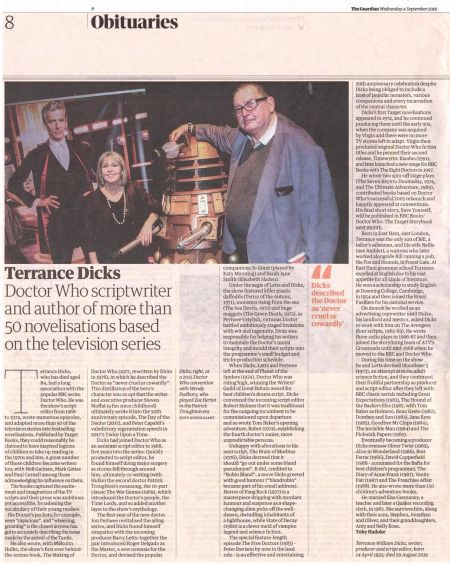 Terrance Dicks, who has died aged 84, had a long association with the popular BBC series Doctor Who. He was the show's script editor from 1968 to 1974, wrote numerous episodes, and adapted more than 50 of the television stories into bestselling novelisations. Published by Target Books, they could reasonably be claimed to have inspired legions of children to take up reading in the 1970s and 80s. A great number of those children became writers too, with Neil Gaiman, Mark Gatiss and Paul Cornell among those acknowledging his influence on them.

The books captured the excitement and imagination of the TV scripts and their prose was ambitious yet accessible, broadening the vocabulary of their young readers - the Doctor's pockets, for example, were "capacious", and "wheezing, groaning" is the closest anyone has got to accurately describing the noise made by the arrival of the Tardis.

He also wrote, with Malcolm Hulke, the show's first ever behind-the-scenes book, The Making of Doctor Who (1972, rewritten by Dicks in 1976), in which he described the Doctor as "never cruel or cowardly". This distillation of the hero's character was so apt that the writer and executive producer Steven Moffat (a fan since childhood) ultimately wrote it into the 50th anniversary episode, The Day of the Doctor (2013), and Peter Capaldi's valedictory regeneration speech in 2017s Twice Upon a Time.

Dicks had joined Doctor Who as an assistant script editor in 1968, five years into the series. Quickly promoted to script editor, he found himself doing major surgery as stories fell through around him, ultimately co-writing (with Hulke) the second doctor Patrick Troughton's swansong, the 10-part classic The War Games (1969), which introduced the Doctor's people, the Time Lords, and so added another layer to the show's mythology.

The first year of the new doctor Jon Pertwee revitalised the ailing series, and Dicks found himself simpatico with the incoming producer Barry Letts: together the pair introduced Roger Delgado as the Master, a new nemesis for the Doctor, and devised the popular companions Jo Grant (played by Katy Manning) and Sarah Jane Smith (Elisabeth Sladen).

Under the aegis of Letts and Dicks, the show featured killer plastic daffodils (Terror of the Autons, 1971), monsters rising from the sea (The Sea Devils, 1972) and huge maggots (The Green Death, 1973), as Pertwee's stylish, virtuous Doctor battled ambitiously staged invasions with wit and ingenuity. Dicks was responsible for helping his writers to maintain the Doctors moral integrity and mould their scripts into the programme's small budget and tricky production schedule.

When Dicks, Letts and Pertwee left at the end of Planet of the Spiders (1974), Doctor Who was riding high, winning the Writers' Guild of Great Britain award for best children's drama script. Dicks convinced the incoming script editor Robert Holmes that it was traditional for the outgoing incumbent to be commissioned upon departure and so wrote Tom Baker's opening adventure, Robot (1974), establishing the fourth doctor's zanier, more unpredictable persona.

Unhappy with alterations to his next script, The Brain of Morbius (1976), Dicks decreed that it should "go out under some bland pseudonym". It did, credited to "Robin Bland", a move Dicks greeted with good humour ("blandrobin" became part of his email address). Horror of Fang Rock (1977) is a masterpiece dripping with mordant humour and suspense as a shape-changing alien picks off the well-drawn, dwindling inhabitants of a lighthouse, while State of Decay (1980) is a clever meld of vampire legend and science fiction.

The special feature-length episode The Five Doctors (1983) Peter Davison by now in the lead role - is an effective and entertaining 20th anniversary celebration despite Dicks being obliged to include a host of popular monsters, various companions and every incarnation of the central character.

Dick's first Target novelisations appeared in 1974, and he continued producing them until the early 90s, when the company was acquired by Virgin and there were no more TV stories left to adapt. Virgin then produced original Doctor Who fiction titles and he penned their second release, Timewyrm: Exodus (1991), and later launched a new range for BBC Books with The Eight Doctors in 1997.

He wrote two spin-off stage plays (The Seven Keys to Doomsday, 1974, and The Ultimate Adventure, 1989), contributed books based on Doctor Who's successful 2005 relaunch and happily appeared at conventions. His final short story, Save Yourself, will be published in BBC Books' Doctor Who: The Target Storybook next month.

Born in East Ham, east London, Terrance was the only son of Bill, a tailor's salesman, and his wife Nellie (nee Ambler), a waitress who later worked alongside Bill running a pub, the Fox and Hounds, in Forest Gate. At East Ham grammar school Terrance excelled at English due to his vast appetite for all kinds of literature. He won a scholarship to study English at Downing College, Cambridge, in 1954 and then joined the Royal Fusiliers for his national service.

On demob he worked as an advertising copywriter until Hulke, his landlord and mentor, asked Dicks to work with him on The Avengers (four scripts, 1962-69). He wrote three radio plays in 1966-67 and then joined the storylining team of ATV's Crossroads until mid-1968 when he moved to the BBC and Doctor Who.

During his time on the show he and Letts devised Moonbase 3 (1973), an attempt at more adult science fiction, and they continued their fruitful partnership as producer and script editor after they left with BBC classic serials including Great Expectations (1981), The Hound of the Baskervilles (1982, with Tom Baker as Holmes), Beau Geste (1982), Dombey and Son (1983), Jane Eyre (1983), Goodbye Mr Chips (1984), The Invisible Man (1984) and The Pickwick Papers (1985).

He married Elsa Gennaney, a teacher and later a Quaker recording clerk, in 1963. She survives him, along with their sons, Stephen, Jonathan and Oliver, and their granddaughters, Amy and Nelly Rose.

Caption: Dicks, right, at a 2015 Doctor Who convention with Wendy Padbury, who played Zoe Heriot in the Patrick Troughton era