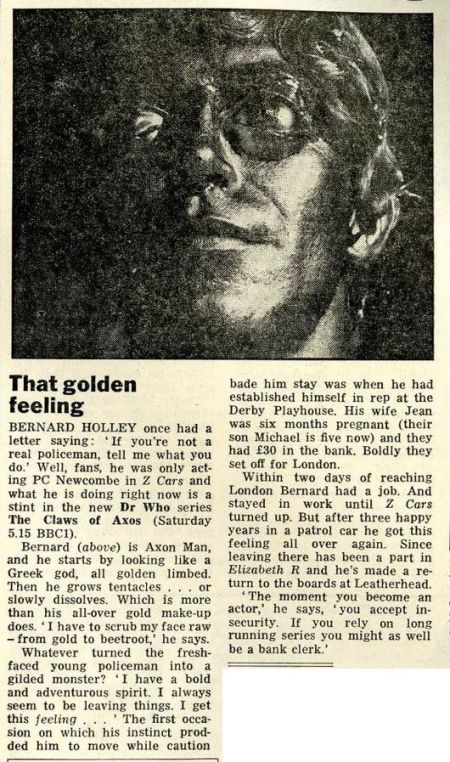 BERNARD HOLLEY once had a letter saying: 'If you're not a real policeman, tell me what you do.' Well, fans, he was only acting PC Newcombe in Z Cars and what he is doing right now is a stint in the new Dr Who series The Claws of Axos (Saturday 5.15 BBC1).

Bernard (above) is Axon Man, and he starts by looking like a Greek god, all golden limbed. Then he grows tentacles ... or slowly dissolves. Which is more than his all-over gold make-up does. 'I have to scrub my face raw — from gold to beetroot,' he says.

Whatever turned the fresh-faced young policeman into a gilded monster? 'I have a bold and adventurous spirit. I always seem to be leaving things. I get this feeling ... ' The first occasion on which his instinct prodded him to move while caution bade him stay was when he had established himself in rep at the Derby Playhouse. His wife Jean was six months pregnant (their son Michael is five now) and they had £30 in the bank. Boldly they set off for London.

Within two days of reaching London Bernard had a job. And stayed in work until Z Cars turned up. But after three happy years in a patrol car he got this feeling all over again. Since leaving there has been a part in Elizabeth R and he's made a return to the boards at Leatherhead.

The moment you become an actor,' he says, 'you accept insecurity. If you rely on long running series you might as well be a bank clerk.'