Thatcher Calls In Dr Who! 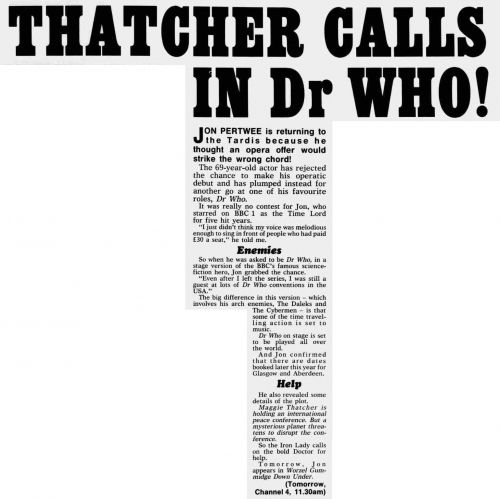 JON PERTWEE is returning to the Tardis because he thought an opera otter would strike the wrong chord!

The 69-year-old actor has rejected the chance to make his operatic debut and has plumped instead for another go at one of his favourite roles, Dr Who.

It was really no contest for Jon, who starred on BBC 1 as the Time Lord for five hit years.

"I just didn't think my voice was melodious enough to sing in front of people who had paid E30 a seat," he told me.

So when he was asked to be Dr Who, in a stage version of the BBC's famous science-fiction hero, Jon grabbed the chance.

"Even after I left the series, I was still a guest at lots of Dr Who conventions in the USA."

The big difference in this version - which involves his arch enemies, The Daleks and The Cybermen - is that some of the time travelling action is set to music.

Dr Who on stage is set to be played all over the world.

And Jon confirmed that there are dates booked later this year for Glasgow and Aberdeen.

He also revealed some details of the plot. Maggie Thatcher is holding an international peace conference. But a mysterious planet threatens to disrupt the conference.

So the Iron Lady calls on the bold Doctor for help.

Tomorrow, Jon appears in Worzel Gummidge Down Under. (Tomorrow, Channel 4, 11.30am)