The 200 Most Important People 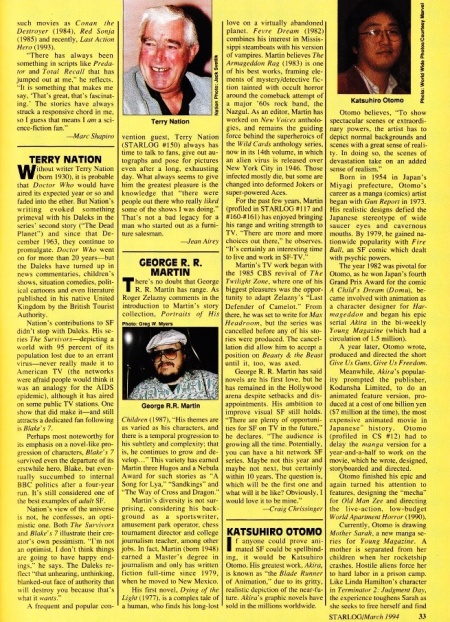 Without writer Terry Nation (born 1930). it is probable that Doctor Who would have aired its expected year or so and faded into the ether. But Nation's writing evoked something primeval with his Daleks in the series' second story ("The Dead Planet") and since that December 1963, they continue to promulgate. Doctor Who went on for more than 20 years—but the Daleks have turned up in news commentaries, children's shows, situation comedies. political cartoons and even literature published in his native United Kingdom by the British Tourist Authority.

Nation's contributions to SF didn't stop with Daleks. His series The Survivors—depicting a world with 95 percent of its population lost due to an errant virus—never really made it to American TV (the networks were afraid people would think it was an analogy for the AIDS epidemic), although it has aired on some public TV stations. One show that did make it—and still attracts a dedicated fan following is Blake's 7.

Perhaps most noteworthy for its emphasis on a novel-like progression of characters, Blake's 7 survived even the departure of its erstwhile hero, Blake. but even-malty succumbed to internal BBC politics after a four-year run. It's still considered one of the best examples of adult SF.

Nation's view of the universe is not. he confesses, an optimistic one. Both The Survivors and Blake's 7 illustrate their creator's own pessimism. "I'm not an optimist. I don't think things are going to have happy endings." he says. The Daleks reflect "that unhearing. Unthinking, blanked-out face of authority that will destroy you because that's what it wants."

A frequent and popular convention guest. Terry Nation (STARLOG #150) always has time to talk to fans, give out autographs and pose for pictures even after a long, exhausting day. What always seems to give hint the greatest pleasure is the knowledge that "there were people out there who really liked some of the shows I was doing." That's not a bad legacy for a man who started out as a furniture salesman.