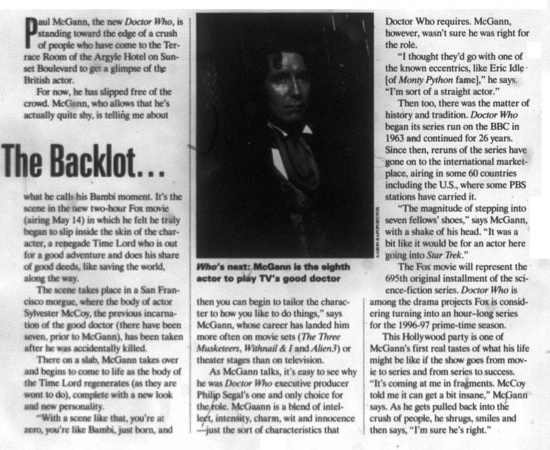 Paul McGann, the new Doctor Who, is standing toward the edge of a crush of people who have come to the Terrace Room of the Argyle Hotel on Sunset Boulevard to get a glimpse of the British actor.

For now, he has slipped free of the crowd. McGann, who allows that he's actually quite shy, is telling me about what he calls his Bambi moment. It's the scene in the new two-hour Fox movie (airing May 14) in which he felt he truly began to slip inside the skin of the character, a renegade Time Lord who is out for a good adventure and does his share of good deeds, like saving the world, along the way.

The scene takes place in a San Francisco morgue, where the body of actor Sylvester McCoy, the previous incarnation of the good doctor (there have been seven, prior to McGann), has been taken after he was accidentally killed.

There on a slab, McGann takes over and begins to come to life as the body of the Time Lord regenerates (as they are wont to do), complete with a new look and new personality.

"With a scene like that, you're at zero, you're like Bambi, just born, and then you can begin to tailor the character to how you like to do things," says McGann, whose career has landed him more often on movie sets (The Three Musketeers, Withnail & I and Alien3) or theater stages than on television.

As McGann talks, it's easy to see why he was Doctor Who executive producer Philip Segal's one and only choice for the role. McGaann is a blend of intellect, intensity, charm, wit and innocence --just the sort of characteristics that Doctor Who requires. McGann, however, wasn't sure he was right for the role.

"I thought they'd go with one of the known eccentrics, like Eric Idle [of Monty Python fame]," he says. "I'm sort of a straight actor."

Then too, there was the matter of history and tradition. Doctor Who began its series run on the BBC in 1963 and continued for 26 years. Since then, reruns of the series have gone on to the international marketplace, airing in some 60 countries including the U.S., where some PBS stations have carried it.

"The magnitude of stepping into seven fellows' shoes," says McGann, with a shake of his head. "It was a bit like it would be for an actor here going into Star Trek."

The Fox movie will represent the 695th original installment of the science-fiction series. Doctor Who is among the drama projects Fox is considering turning into an hour-long series for the 1996-97 prime-time season.

This Hollywood party is one of McGann's first real tastes of what his life might be like if the show goes from movie to series and from series to success. "It's coming at me in fragments. McCoy told me it can get a bit insane," McGann says. As he gets pulled back into the crush of people, he shrugs, smiles and then says, "I'm sure he's right."

PHOTO (COLOR): Who's next: McGann is the eighth actor to play TV's good doctor