The Commerce of Fantasy 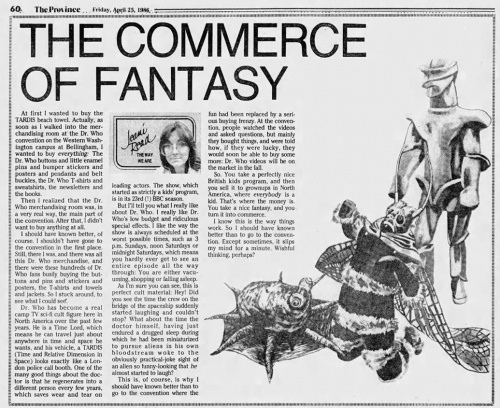 At first I wanted to buy the TARDIS beach towel. Actually, as soon as I walked into the merchandising room at the Dr. Who convention on the Western Washington campus at Bellingham, I wanted to buy everything: The Dr. Who buttons and little enamel pins and bumper stickers and posters and pendants and belt buckles, the Dr. Who T-shirts and sweatshirts, the newsletters and the books.

Then I realized that the Dr. Who merchandising room was, in a very real way, the main part of the convention. After that, I didn't want to buy anything at all.

I should have known better, of course. I shouldn't have gone to the convention in the first place. Still, there I was, and there was all this Dr. Who merchandise, and there were these hundreds of Dr. Who fans busily buying the buttons and pins and stickers and posters, the T-shirts and towels and jackets. So I stuck around. to see what I could see.

Dr. Who has become a real camp TV sci-fi cult figure here in North America over the past few years. He is a Time Lord, which means he can travel just about anywhere in time and space he wants, and his vehicle, a TARDIS (Time and Relative Dimension in Space) looks exactly like a London police call booth. One of the many good things about the doctor is that he regenerates into a different person every few years, which saves wear and tear on

leading actors. The show, which started as strictly a kids' program, is in its 23rd (!) BBC season.

But I'll tell you what I really like about Dr. Who. I really like Dr. Who's low budget and ridiculous special effects. I like the way the show is always scheduled at the worst possible times, such as 3 p.m. Sundays, noon Saturdays or midnight Saturdays, which means you hardly ever get to see an entire episode all the way through: You are either vacuuming, shopping or falling asleep.

As I'm sure you can see, this is perfect cult material: Hey! Did you see the time the crew on the bridge of the spaceship suddenly started laughing and couldn't stop? What about the time the doctor himself, having just endured a drugged sleep during which he had been miniaturized to pursue aliens in his own bloodstream woke to the obviously practical-joke sight of an alien so funny-looking that he almost started to laugh?

This is, of course, is why I should have known better than to go to the convention where the fun had been replaced by a serious buying frenzy. At the convention, people watched the videos and asked questions, but mainly they bought things, and were told how, if they were lucky, they would soon be able to buy some more: Dr. Who videos will be on the market in the fall.

So. You take a perfectly nice British kids program, and then you sell it to grownups in North America, where everybody is a kid. That's where the money is. You take a nice fantasy, and you turn it into commerce.

I know this is the way things work. So I should have known better than to go to the convention. Except sometimes, it slips my mind for a minute. Wishful thinking, perhaps?