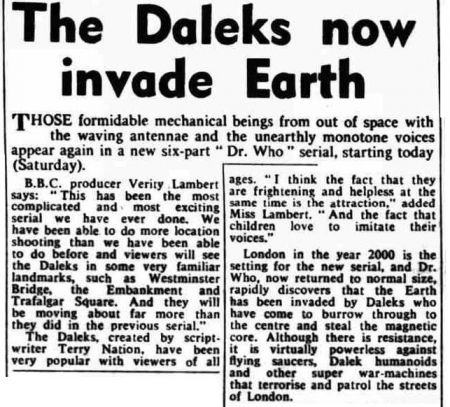 THOSE formidable mechanical beings from out of space with the waving antennae and the unearthly monotone voices appear again in a new six-part "Dr. who" serial, starting today (Saturday).

B.B.C. producer Verity Lambert says: "This has been the most complicated and most exciting serial we have ever done. We have been able to do more location shooting than we have been able to do before and viewers will see the Daleks in some very familiar landmarks, such as Westminster Bridge, the Embankment and Trafalgar Square. And they will be moving about far more than they did in the previous serial."

The Daleks, created by scriptwriter Terry Nation. have been very popular with viewers of all ages. "I think the tact that they are frightening and helpless at the same time is the attraction," added Miss Lambert. "And the fact that children love to imitate their voice."

London in the year 2000 is the setting for the new serial. and Dr. Who, now returned to normal size. rapidly discovers that the Earth has been invaded by Daleks who have come to burrow through to the centre and steal the magnetic core. Although there is resistance. it is virtually powerless against flying saucers. Dalek humanoids and other super war-machines that terrorise and patrol the streets of London.