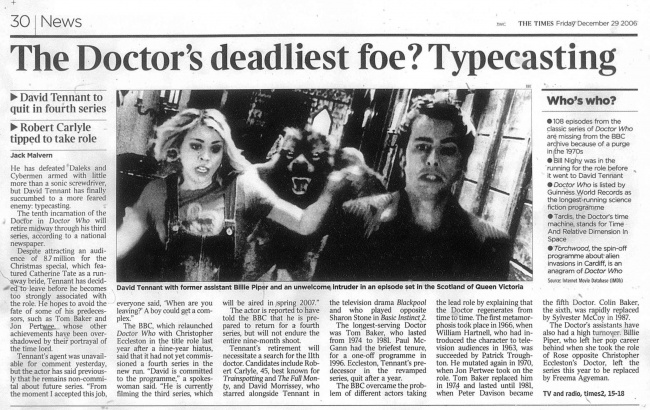 He has defeated Daleks and Cybermen armed with little more than a sonic screwdriver, but David Tennant has finally succumbed to a more feared enemy: typecasting.

The tenth incarnation of the Doctor in Doctor Who will retire midway through his third series, according to a national newspaper.

Despite attracting an audience of 8.7 million for the Christmas special, which featured Catherine Tate as a runaway bride, Tennant has decided to-leave before he becomes too strongly associated with the role. He hopes to avoid the fate of some of his predecessors, such as Tom Baker and Jon Pertwee, whose other achievements have been overshadowed by their portrayal of the time lord.

Tennant's agent was unavailable for comment yesterday, but the actor has said previously that he remains non-commital about future series. "From the moment I accepted this job, everyone said, 'When are you leaving?' A boy could get a complex."

The BBC, which relaunched Doctor Who with Christopher Eccleston in the title role last year after a nine-year hiatus, said that it had not yet commissioned a fourth series in the new run. "David is committed to the programme," a spokeswoman said. "He is currently filming the third series, which will be aired in spring 2007."

The actor is reported to have told the BBC that he is prepared to return for a fourth series, but will not endure the entire nine-month shoot

Tennant's retirement will necessitate a search for the 11th doctor. Candidates include Robert Carlyle, 45, best known for Trainspotting and The Full Monty, and David Morrissey, who starred alongside Tennant in the television drama Blackpool and who played opposite Sharon Stone in Basic Instinct 2.

The longest-serving Doctor was Tom Baker, who lasted from 1974 to 1981. Paul McGann had the briefest tenure, for a one-off programme in 1996. Eccleston, Tennant's predecessor in the revamped series, quit after a year.

The BBC overcame the problem of different actors taking the lead role by explaining that the Doctor regenerates from time to time. The first metamorphosis took place in 1966, when William Hartnell, who had introduced the character to television audiences in 1963, was succeeded by Patrick Troughton. He mutated again in 1970, when Jon Pertwee took on the role. Tom Baker replaced him in 1974 and lasted until 1981, when Peter Davison became the fifth Doctor. Colin Baker, the sixth, was rapidly replaced by Sylvester McCoy in 1987.

The Doctor's assistants have also had a high turnover. Billie Piper, who left her pop career behind when she took the role of Rose opposite Christopher Eccleston's Doctor, left the series this year to be replaced by Freema Agyeman.

Caption: David Tennant with former assistant Billie Piper and an unwelcome intruder in an episode set in the Scotland of Queen Victoria