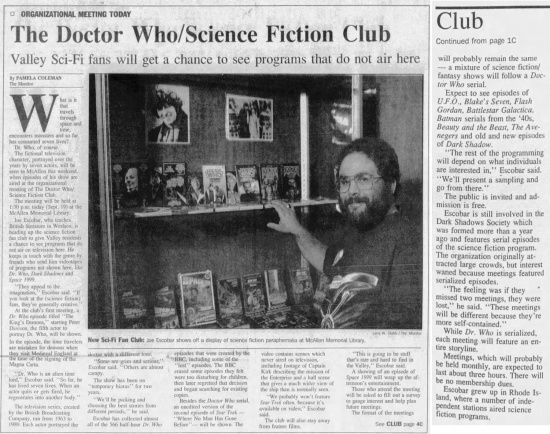 What is it that travels through space and time, encounters monsters and so far has consumed seven lives?

The fictional television character, portrayed over the years by seven actors, will be seen in McAllen this weekend, when episodes of his show are aired at the organizational meeting of The Doctor Who/ Science Fiction Club.

Joe Escobar, who teaches British literature in Weslaco, is heading up the science fiction fan club to give Valley residents a chance to see programs that do not air on television here. He keeps in touch with the genre by friends who send him videotapes of programs not shown here, like Dr. Who, Dark Shadows and Space 1999.

"They appeal to the imagination," Escobar said. "If you look at the (science fiction) fans, they're generally creative."

At the club's first meeting, a Dr. Who episode titled The King's Demons," starring Peter Davison, the fifth actor to portray Dr. Who, will be shown. In the episode, the time travelers are mistaken for demons when the visit Midieval England at the time orlife signing of the Magna Carta.

"Dr. Who is an alien time lord," Escobar said. "So far, he has lived seven lives. When an actor quits or gets fired, he regenerates into another body."

The television series, created by the British Broadcasting Company, ran from 1963 to 1989. Each actor portrayed the doctor with a different tone. "Some are grim and serious," Escobar said. "Others are almost campy.

The show has been on "temporary hiatus" for two years.

"We'll be picking and choosing the best stories from different periods," he said.

Escobar has collected almost all of the 566 half-hour Dr. Who episodes that were created by the "BBC, including some of the "lost" episodes. The BBC erased some episodes they felt were too disturbing for children, then later regretted that decision and began searching for existing copies.

Besides the Doctor Who serial, an unedited version of the second episode of Star Trek —"Where No Man Has Gone Before"-- will be shown. The video contains scenes which never aired on television, including footage of Captain Kirk describing the mission of the Enterprise and a hall scene that gives a much wider view of the ship than is normally seen.

The club will also stay away from feature films.

"This is going to be stuff that's rare and hard to find in the Valley," Escobar said.

A showing of an episode of Space 1999 will wrap up the afternoon's entertainment.

Those who attend the meeting will be asked to fill out a survey to gauge interest and help plan future meetings.

The format of the meetings will probably remain the same — a mixture of science fiction/fantasy shows will follow a Doctor Who serial.

Expect to see episodes of U.F.O., Blake's Seven, Flash Gordan, Battlestar Galactica, Batman serials from the '40s, Beauty and the Beast, The Avenegers and old and new episodes of Dark Shadow.

"The rest of the programming will depend on what individuals are interested in," Escobar said. "We'll present a sampling and go from there."

The public is invited and admission is free.

Escobar is still involved in the Dark Shadows Society which was formed more than a year ago and features serial episodes of the science fiction program. The organization originally attracted large crowds, but interest waned because meetings featured serialized episodes.

"The feeling was if they missed two meetings, they were lost," he said. "These meetings will be different because they're more self-contained."

While Dr. Who is serialized, each meeting will feature an entire storyline.

Meetings, which will probably be held monthly, are expected to last about three hours. There will be no membership dues.

Escobar grew up in Rhode Island, where a number of independent stations aired science fiction programs.