The Doctor Will See You Now... 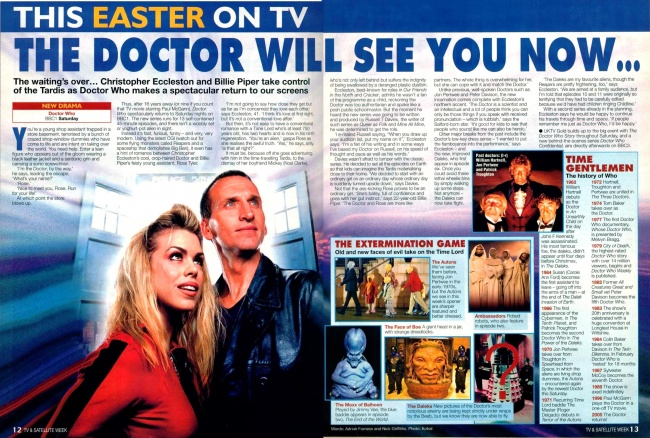 The waiting's over... Christopher Eccleston and Billie Piper take control of the Tardis as Doctor Who makes a spectacular return to our screens

You're a young shop assistant trapped in a store basement, terrorised by a bunch of crazed shop-window dummies who have come to life and are intent on taking over the world. You need help. Enter a lean figure who appears out of the gloom wearing a black leather jacket and a sardonic grin and carrying a sonic screwdriver.

'Nice to meet you, Rose. Run for your life!'

At which point the store blows up.

Thus, after 16 years away (or nine if you count that TV movie starring Paul McGann), Doctor Who spectacularly returns to Saturday nights on BBC1. The new series runs for 13 self-contained 45-minute episodes, and there isn't a wobbly set or yoghurt-pot alien in sight.

Instead it's fast, furious, funny - and very, very modern. Using the latest CGI (watch out for some flying monsters called Reapers and a spaceship that demolishes Big Ben), it even has a hint of romance between Christopher Eccleston's cool, crop-haired Doctor and Billie Piper's feisty young assistant, Rose Tyler.

'I'm not going to say how close they get but as far as I'm concerned they love each other,' says Eccleston, 41. 'I think it's love at first sight, but it's not a conventional love affair.'

But then, it's not easy to have a conventional romance with a Time Lord who's at least 750 years old, has two hearts and is now in his ninth regeneration. 'You're an alien,' gasps Rose as she realises the awful truth. 'Yes,' he says, airily. 'Is that all right?'

It must be, because off she goes adventuring with him in the time-travelling Tardis, to the dismay of her boyfriend Mickey (Noel Clarke), who's not only left behind but suffers the indignity of being swallowed by a deranged plastic dustbin.

Eccleston, best-known for roles in Our Friends in the North and Cracker, admits he wasn't a fan of the programme as a child, reckoning the Doctor was too authoritarian and spoke like a posh public schoolmaster. But the moment he heard the new series was going to be written and produced by Russell T Davies, the writer of such series as Queer as Folk and Mine All Mine, he was determined to get the rote.

'I e-mailed Russell saying, "When you draw up your audition list, put my name on it",' Eccleston says. 'I'm a fan of his writing and in some ways I've based my Doctor on Russell, on his speed of thought and pace as well as his words.'

Davies wasn't afraid to tamper with the classic series. He decided to set all the episodes on Earth so that kids can imagine the Tardis materialising close to their home. 'We decided to start with an ordinary girl on an ordinary day whose ordinary day is suddenly turned upside down,' says Davies.

Not that the ass-kicking Rose proves to be an ordinary girl. 'She's ballsy, full of confidence and goes with her gut instinct,' says 22-year-old Billie Piper. 'The Doctor and Rose are more like partners. The whole thing is overwhelming for her, but she can cope with it and match the Doctor.'

Unlike previous, well-spoken Doctors such as Jon Pertwee and Peter Davison, the new incarnation comes complete with Eccleston's northern accent. 'The Doctor is a scientist and an intellectual and a lot of people think you can only be those things if you speak with received pronunciation - which is rubbish,' says the Salford-born star. 'It's good for kids to see that people who sound like me can also be heroic.'

Other major breaks from the past include the Doctor's low-key dress sense - 'I wanted to put the flamboyance into the performance,' says Eccleston - and the new, improved Daleks, who first appear in episode six. Once you could avoid these lethal wheelie bins by simply walking up some steps. Not anymore the Daleks can now take flight.

'The Daleks are my favourite aliens, though the Reapers are pretty frightening, too,' says Eccleston. 'We are aimed at a family audience, but I'm told that episodes 10 and 11 were originally so terrifying that they had to be carefully edited because we'd have had children ringing Childline.'

With a second series already in the planning, Eccleston says he would be happy to continue his travels through time and space. 'If people remember me just as Doctor Who, I'd be happy.'

•UKTV Gold builds up to the big event with The Doctor Who Story throughout Saturday, and a new behind-the-scenes series Doctor Who Confidential, airs directly afterwards on BBC3.

Old and new faces of evil take on the Time Lord

The Autons We've seen them before, facing Jon Pertwee in the early-1970s, but the Autons we see in this week's opener are sharper featured and better dressed.

The Face of Boe A giant head in a jar, with strange dreadlocks.

The Moxx of Balhoon Played by Jimmy Vee, the blue baddie appears in episode two, The End of the World.

The Daleks New pictures of the Doctor's most notorious enemy are being kept strictly under wraps by the Beeb, but we know they are now able to fly.

The history of Who

1963 William Hartnell debuts as the Doctor in An Unearthly Child on the day after John F Kennedy was assassinated. His most famous foe, the daleks, didn't appear until four days before Christmas, in The Daleks.

1964 Susan (Carole Ann Ford) becomes the first assistant to leave - going off into the arms of a man - at the end of The Dalek Invasion of Earth.

1966 The first appearance of the Cybermen, in The Tenth Planet, and Patrick Troughton becomes the second Doctor Who in The Power of the Daleks.

1970 Jon Pertwee takes over from Troughton in Spearhead from Space, in which the aliens are living shop dummies, the Autons - encountered again by the newest Doctor this Saturday.

1972 Hartnell, Troughton and Pertwee are united in The Three Doctors.

1974 Tom Baker takes over as the Doctor.

1977 The first Doctor Who documentary, Whose Doctor Who, is presented by Melvyn Bragg.

1979 City of Death, the highest-rated Doctor Who story with over 14 million viewers, begins and Doctor Who Weekly is published.

1983 The show's 20th anniversary is celebrated with a huge convention at Longleat House in Wiltshire.

1984 Colin Baker takes over from Davison in The Twin Dilemma. In February Doctor Who is 'rested' for 18 months

1989 The show is axed indefinitely.

1996 Paul McGann plays the Doctor in a one-off TV movie.