The Doctor has a new companion! 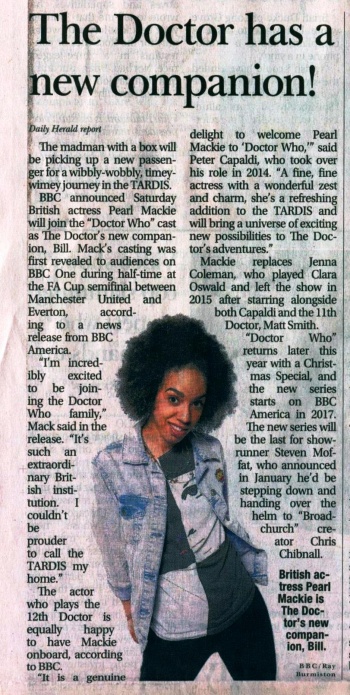 The madman with a box will be picking up a new passenger for a wibbly-wobbly, timey-wimey journey in the TARDIS.

BBC announced Saturday British actress Pearl Mackie will join the "Doctor Who" cast as The Doctor's new companion, Bill. Mack's casting was first revealed to audiences on BBC One during half-time at the FA Cup semifinal between Manchester United and Everton, according to a news release from BBC America.

"I'm incredibly excited to be joining the Doctor Who family," Mack said in the release. "It's such an extraordinary British institution. I couldn't be prouder to call the TARDIS my home."

The actor who plays the 12th Doctor is equally happy to have Mackie onboard, according to BBC.

"It is a genuine delight to welcome Pearl Mackie to 'Doctor Who,"' said Peter Capaldi, who took over his role in 2014. "A fine, fine actress with a wonderful zest and charm, she's a refreshing addition to the TARDIS and will bring a universe of exciting new possibilities to The Doctor's adventures."

Mackie replaces Jenna Coleman, who played Clara Oswald and left the show in 2015 after starring alongside both Capaldi and the 11th Doctor, Matt Smith. "Doctor Who" returns later this year with a Christmas Special, and the new series starts on BBC America in 2017. The new series will be the last for show-runner Steven Moffat, who announced in January he'd be stepping down and handing over the helm to "Broadchurch" creator Chris Chibnall.