The Doctor is still making the rounds, 50 years later 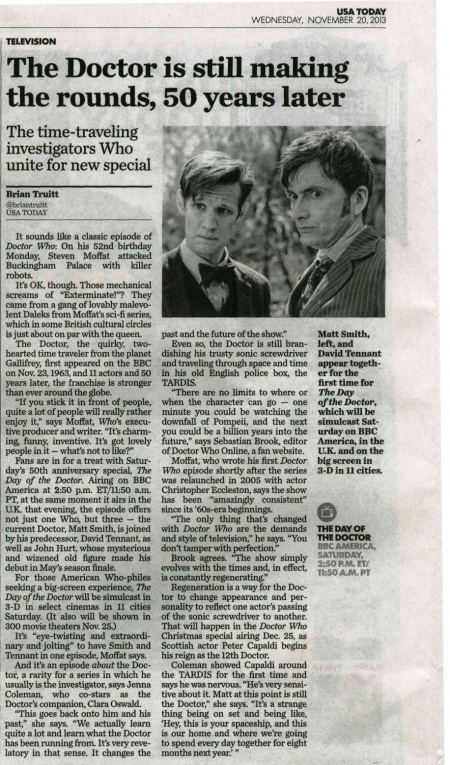 It sounds like a classic episode of Doctor Who: On his 52nd birthday Monday, Steven Moffat attacked Buckingham Palace with killer robots.

It's OK, though. Those mechanical screams of "Exterminate)"? They came from a gang of lovably malevolent Daleks from Moffat's sci-fi series, which in some British cultural circles is just about on par with the queen.

The Doctor, the quirky, two-hearted time traveler from the planet Gallifrey, first appeared on the BBC on Nov. 23, 1963, and 11 actors and 50 years later, the franchise is stronger than ever around the globe.

"If you stick it in front of people, quite a lot of people will really rather enjoy it," says Moffat, Who's executive producer and writer. "It's charming, funny, inventive. It's got lovely people in it — what's not to like?"

Fans are in for a treat with Saturday's 50th anniversary special, The Day of the Doctor. Airing on BBC America at 2:50 p.m. ET/11:50 a.m. PT, at the same moment it airs in the U.K. that evening, the episode offers not just one Who, but three — the current Doctor, Matt Smith, is joined by his predecessor, David Tennant, as well as John Hurt, whose mysterious and wizened old figure made his debut in May's season finale.

For those American Who-philes seeking a big-screen experience, The Day of the Doctor will be simulcast in 3-D in select cinemas in 11 cities Saturday. (It also will be shown in 300 movie theaters Nov. 25.)

It's "eye-twisting and extraordinary and jolting" to have Smith and Tennant in one episode, Moffat says.

And it's an episode about the Doctor, a rarity for a series in which he usually is the investigator, says Jenna Coleman, who co-stars as the Doctor's companion, Clara Oswald.

"This goes back onto him and his past," she says. "We actually learn quite a lot and learn what the Doctor has been running from. It's very revelatory in that sense. It changes the past and the future of the show."

Even so, the Doctor is still brandishing his trusty sonic screwdriver and traveling through space and time in his old English police box, the TARDIS.

"There are no limits to where or when the character can go — one minute you could be watching the downfall of Pompeii, and the next you could be a billion years into the future," says Sebastian Brook, editor of Doctor Who Online, a fan website.

Moffat, who wrote his first Doctor Who episode shortly after the series was relaunched in 2005 with actor Christopher Eccleston, says the show has been "amazingly consistent" since its '60s-era beginnings.

"The only thing that's changed with Doctor Who are the demands and style of television," he says. "You don't tamper with perfection."

Brook agrees. "The show simply evolves with the times and, in effect, is constantly regenerating."

Regeneration is a way for the Doctor to change appearance and personality to reflect one actor's passing of the sonic screwdriver to another. That will happen in the Doctor Who Christmas special airing Dec. 25, as Scottish actor Peter Capaldi begins his reign as the 12th Doctor.

Coleman showed Capaldi around the TARDIS for the first time and says he was nervous. "He's very sensitive about it. Matt at this point is still the Doctor," she says. "It's a strange thing being on set and being like, 'Hey, this is your spaceship, and this is our home and where we're going to spend every day together for eight months next year.'"