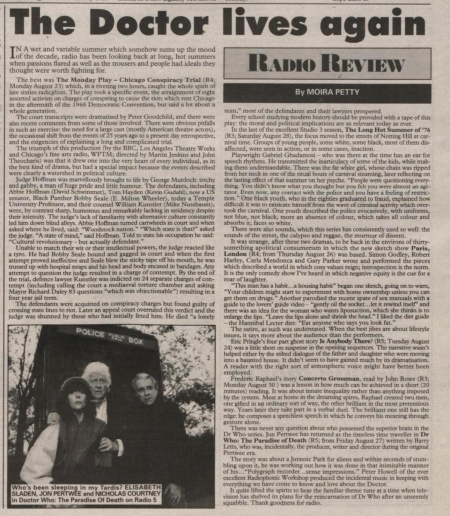 There was never any question about who possessed the superior brain in the Dr Who series. Jon Pertwee has returned as the timeless time traveller in Dr Who: The Paradise of Death (R5; from Friday August 27) written by Barry Letts, who was, incidentally, the producer, writer and director during the original Pertwee era.

The story was about a Jurassic Park for aliens and within seconds of stumbling upon it, he was working out how it was done in that inimitable manner of his..."Polygraph recorder...sense impressions." Peter Howell of the ever excellent Radiophonic Workshop produced the incidental music in keeping with everything we have come to know and love about the Doctor.

It quite lifted the spirits to hear the familiar theme tune at a time when television has shelved its plans for the reincarnation of Dr Who after an unseemly squabble. Thank goodness for radio.

Caption: Who's been sleeping in my Tardis? ELISABETH SLADEN, JON PERTWEE and NICHOLAS COURTNEY in Doctor Who: The Paradise Of Death on Radio 5