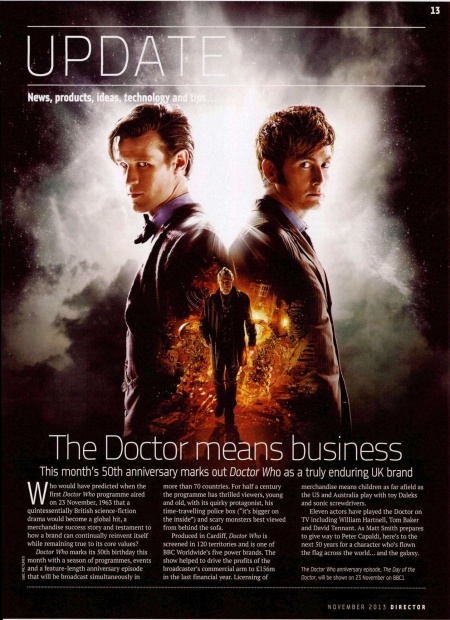 Who would have predicted when the first Doctor Who programme aired on 23 November, 1963 that a quintessentially British science-fiction drama would become a global hit, a merchandise success story and testament to how a brand can continually reinvent itself while remaining true to its core values?

Doctor Who marks its 50th birthday this month with a season of programmes, events and a feature-length anniversary episode that will be broadcast simultaneously in more than 70 countries. For half a century the programme has thrilled viewers, young and old, with its quirky protagonist, his time-travelling police box ("it's bigger on the inside") and scary monsters best viewed from behind the sofa.

Produced in Cardiff, Doctor Who is screened in 120 territories and is one of BBC Worldwide's five power brands. The show helped to drive the profits of the broadcaster's commercial arm to £156m in the last financial year. Licensing of merchandise means children as far afield as the US and Australia play with toy Daleks and sonic screwdrivers.

Eleven actors have played the Doctor on TV including William Hartnell, Tom Baker and David Tennant. As Matt Smith prepares to give way to Peter Capaldi, here's to the next 50 years for a character who's flown the flag across the world... and the galaxy.

The Doctor Who anniversary episode, The Day of the Doctor, will be shown on 23 November on BBC1