The Doctor on trial in new television series 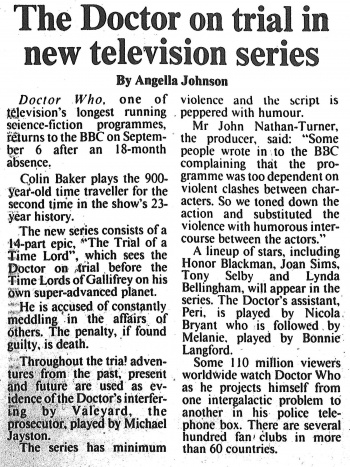 Doctor Who, one of television's longest running science-fiction programmes, returns to the BBC on September 6 after an 18-month absence.

Colin Baker plays the 900-year-old time traveller for the second time in the show's 23-year history.

The new series consists of a 14-part epic, "The Trial of a Time Lord" which sees the Doctor on trial before the Time Lords of Gallifrey on his own super-advanced planet.

He is accused of constantly meddling in the affairs of others. The penalty, if found guilty, is death.

Throughout the trial adventures from the past, present and future are used. as evidence of the Doctor's interfering by Valeyard, the prosecutor, played by Michael Jayston.

The series has minimum violence and the script is peppered with humour.

Mr John Nathan-Turner, the producer, said: "Some people wrote in to the BBC complaining that the programme was too dependent on violent clashes between characters. So we toned down the action and substituted the violence with humorous intercourse between the actors."

A lineup of stars, including Honor Blackman, Joan Sims, Tony Selby and Lynda Bellingham, will appear in the series. The Doctor's assistant, Peri, is played by Nicola Bryant who is followed by Melanie, played by Bonnie Langford.

Some 110 million viewers worldwide watch Doctor Who as he projects himself from one intergalactic problem to another in his police telephone box. There are several hundred fan clubs in more than 60 countries.