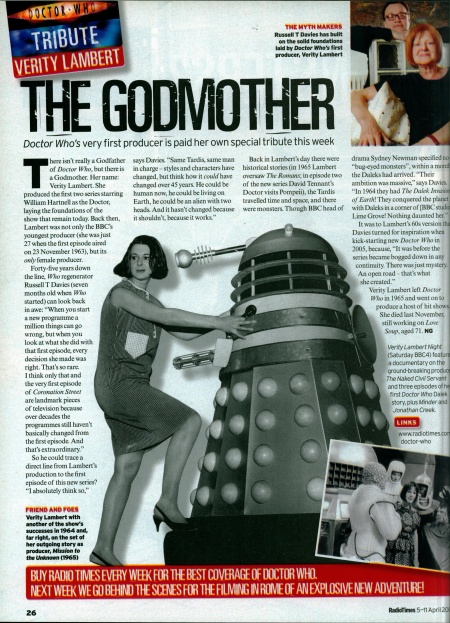 There isn't really a Godfather of Doctor Who, but there is a Godmother. Her name: Verity Lambert. She produced the first two series starring William Hartnell as the Doctor, laying the foundations of the show that remain today. Back then, Lambert was not only the BBC's youngest producer (she was just 27 when the first episode aired on 23 November 1963), but its only female producer.

Forty-five years down the line, Who regenerator Russell T Davies (seven months old when Who started) can look back in awe: "When you start a new programme a million things can go wrong, but when you look at what she did with that first episode, every decision she made was right. That's so rare. I think only that and the very first episode of Coronation Street are landmark pieces of television because over decades the programmes still haven't basically changed from the first episode. And that's extraordinary."

So he could trace a direct line from Lambert's production to the first episode of this new series? "I absolutely think so," says Davies. "Same Tardis, same man in charge — styles and characters have changed, but think how it could have changed over 45 years. He could be human now, he could be living on Earth, he could be an alien with two heads. And it hasn't changed because it shouldn't, because it works."

Back in Lambert's day there were historical stories (in 1965 Lambert oversaw The Romans; in episode two of the new series David Tennant's Doctor visits Pompeii), the Tardis travelled time and space, and there were monsters. Though BBC head of drama Sydney Newman specified no "bug-eyed monsters", within a month the Daleks had arrived. "Their ambition was massive," says Davies. "In 1964 they had The Dalek Invasion of Earth! They conquered the planet with Daleks in a comer of [BBC studio Lime Grove! Nothing daunted her."

It was to Lambert's 60s version that Davies turned for inspiration when kick-starting new Doctor Who in 2005, because, "It was before the series became bogged down in any continuity. There was just mystery. An open road — that's what she created."

Verity Lambert left Doctor Who in 1965 and went on to produce a host of hit show She died last November, still working on Love Soup, aged 71.

Verity Lambert Night (Saturday BBC4) feature a documentary on the ground-breaking production The Naked Civil Servant and three episodes of the first Doctor Who Dalek story, plus Minder and Jonathan Creek.

FRIEND AND FOES Verity Lambert with another of the show's successes in 1964 and, far right, on the set of her outgoing story as producer, Mission to the Unknown (1965)

THE MYTH MAKERS Russell T Davies has built on the solid foundations laid by Doctor Who's first producer, Verity Lambert