The History of Who? 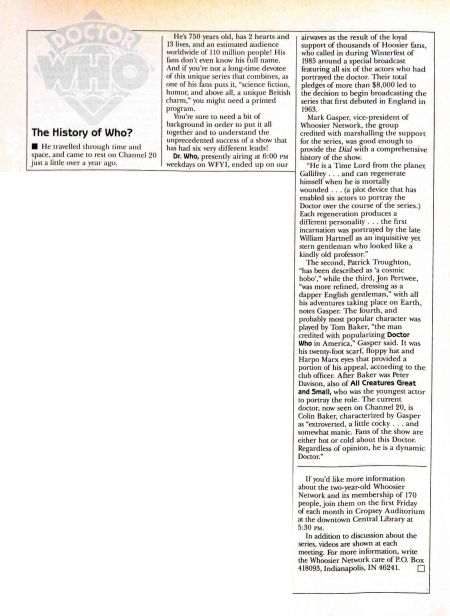 He travelled through time and space, and came to rest on Channel 20 just a little over a year ago.

He's 750 years old, has 2 hearts and 13 lives, and an estimated audience worldwide of 110 million people! His fans don't even know his full name. And if you're not a long-time devotee of this unique series that combines, as one of his fans puts it, "science fiction, humor, and above all, a unique British charm," you might need a printed program.

You're sure to need a bit of background in order to put it all together and to understand the unprecedented success of a show that has had six very different leads!

Dr. Who, presently airing at 6:00 PM weekdays on WFYI, ended up on our airwaves as the result of the loyal support of thousands of Hoosier fans, who called in during Winterfest of 1985 around a special broadcast featuring all six of the actors who had portrayed the doctor. Their total pledges of more than $8,000 led to the decision to begin broadcasting the series that first debuted in England in 1963.

Mark Gasper, vice-president of Whoosier Network, the group credited with marshalling the support for the series, was good enough to provide the Dial with a comprehensive history of the show.

"He is a Time Lord from the planet Gallifrey ... and can regenerate himself when he is mortally wounded ... (a plot device that has enabled six actors to portray the Doctor over the course of the series.) Each regeneration produces a different personality ... the first incarnation was portrayed by the late William Hartnell as an inquisitive yet stern gentleman who looked like a kindly old professor."

The second, Patrick Troughton, "has been described as 'a cosmic hobo'," while the third, Jon Pertwee, "was more refined, dressing as a dapper English gentleman," with all his adventures taking place on Earth, notes Gasper. The fourth, and probably most popular character was played by Tom Baker, "the man credited with popularizing Doctor Who in America," Gasper said. It was his twenty-foot scarf, floppy hat and Harpo Marx eyes that provided a portion of his appeal, according to the club officer. After Baker was Peter Davison, also of All Creatures Great and Small, who was the youngest actor to portray the role. The current doctor, now seen on Channel 20, is Colin Baker, characterized by Gasper as "extroverted, a little cocky ... and somewhat manic. Fans of the show are either hot or cold about this Doctor. Regardless of opinion, he is a dynamic Doctor."

If you'd like more information about the two-year-old Whoosier Network and its membership of 170 people, join them on the first Friday of each month in Cropsey Auditorium at the downtown Central Library at 5:30 PM.

In addition to discussion about the series, videos are shown at each meeting. For more information, write the Whoosier Network care of P.O. Box 418093, Indianapolis, IN 46241.