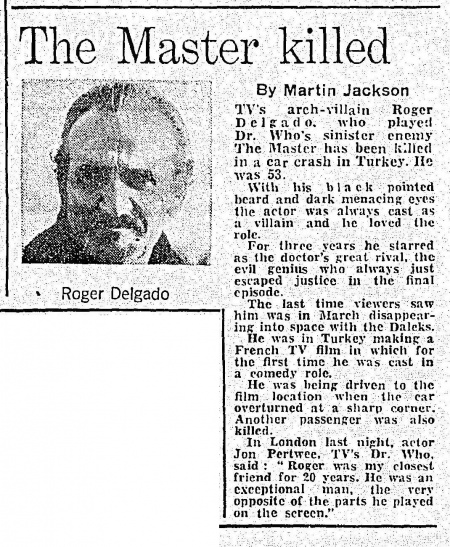 TV's Roger Delgado, who played Dr. Who's sinister enemy The Master, has been killed in a car crash in Turkey. He was 53.

With his black pointed heard and dark menacing eyes the actor was always cast as a villain and : he loved", the role.

For, three years he starred as the doctor's great rival, the evil genius who always, just escaped justice in the final episode.

The last time viewers saw him was in March disappearing into space with the Daleks.

He was in Turkey making a French TV film in which for the first time he was cast in a comedy role.

He was being driven to the film location when the car overturned at a sharp corner. Another passenger was, also killed.

In London last night, actor Jon Pertwee, TV's Dr. Who, said: "Roger was my closest friend for 20 years. He was an exceptional man, the very opposite of the parts he played on the screen."