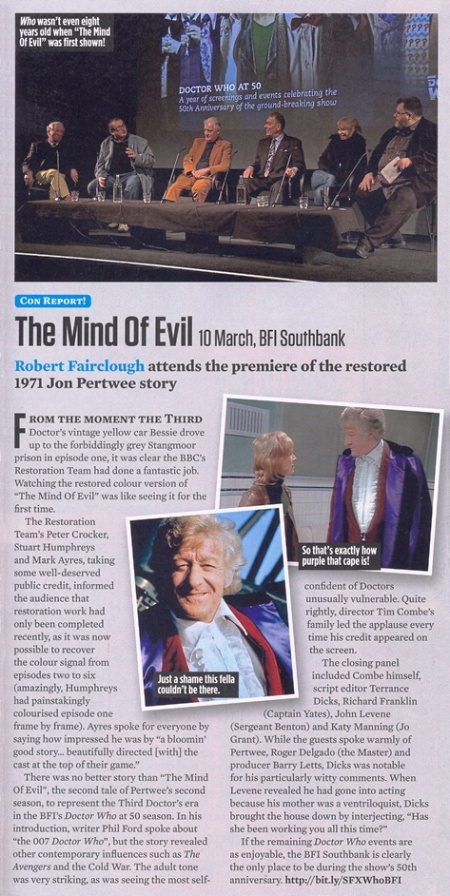 FROM THE MOMENT THE THIRD Doctor's vintage yellow car Bessie drove up to the forbiddingly grey Stangmoor prison in episode one, it was clear the BBC's Restoration Team had done a fantastic job. Watching the restored colour version of "The Mind Of Evil" was like seeing it for the first time.

The Restoration Team's Peter Crocker, Stuart Humphreys and Mark Ayres, taking some well-deserved public credit, informed the audience that restoration work had only been completed recently, as it was now possible to recover the colour signal from episodes two to six (amazingly, Humphreys had painstakingly colourised episode one frame by frame). Ayres spoke for everyone by saying how impressed he was by "a bloomin' good story... beautifully directed [with] the cast at the top of their game."

There was no better story than "The Mind Of Evil", the second tale of Pertwee's second season, to represent the Third Doctor's era in the BFI's Doctor Who at 50 season. In his introduction, writer Phil Ford spoke about "the 007 Doctor Who", but the story revealed other contemporary influences such as The Avengers and the Cold War. The adult tone was very striking, as was seeing the most self-confident of Doctors unusually vulnerable. Quite rightly, director Tim Combo's family led the applause every time his credit appeared on the screen.

The closing panel included Combe himself, script editor Terrance Dicks, Richard Franklin (Captain Yates), John Levene (Sergeant Benton) and Katy Manning (Jo Grant). While the guests spoke warmly of Pertwee, Roger Delgado (the Master) and producer Barry Letts, Dicks was notable for his particularly witty comments. When Levene revealed he had gone into acting because his mother was a ventriloquist, Dicks brought the house down by interjecting, "Has she been working you all this time?"

If the remaining Doctor Who events are as enjoyable, the BFI Southbank is clearly the only place to be during the show's 50th anniversary.

Who wasn't even eight years old when "The Mind Of Evil" was first shown!

Just a shame this fella couldn't be there.

So that's exactly how purple that cape is!