The Muppets Take the O2 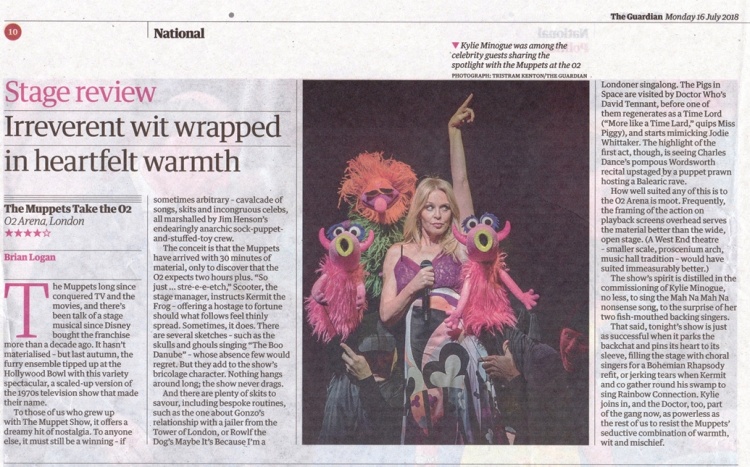 The Muppets Take the O2

The Muppets long since conquered TV and the movies, and there's been talk of a stage musical since Disney bought the franchise more than a decade ago. It hasn't materialised - but last autumn, the furry ensemble tipped up at the Hollywood Bowl with this variety spectacular, a scaled-up version of the 1970s television show that made their name.

To those of us who grew up with The Muppet Show, it offers a dreamy hit of nostalgia. To anyone else, it must still be a winning - if sometimes arbitrary - cavalcade of songs, skits and incongruous celebs, all marshalled by Jim Henson's endearingly anarchic sock-puppet-and-stuffed-toy crew.

The conceit is that the Muppets have arrived with 30 minutes of material, only to discover that the 02 expects two hours plus. "So just ... stre-e-e-etch," Scooter, the stage manager, instructs Kermit the Frog - offering a hostage to fortune should what follows feel thinly spread. Sometimes, it does. There are several sketches - such as the skulls and ghouls singing "The Boo Danube - whose absence few would regret. But they add to the show's bricolage character. Nothing hangs around long; the show never drags.

And there are plenty of skits to savour, including bespoke routines, such as the one about Gonzo's relationship with a jailer from the Tower of London, or Rowlf the Dog's Maybe It's Because I'm a Londoner singalong. The Pigs in Space are visited by Doctor Who's David Tennant, before one of them regenerates as a Time Lord ("More like a Time Lard," quips Miss Piggy), and starts mimicking Jodie Whittaker. The highlight of the first act, though, is seeing Charles Dance's pompous Wordsworth recital upstaged by a puppet prawn hosting a Balearic rave.

How well suited any of this is to the 02 Arena is moot. Frequently, the framing of the action on playback screens overhead serves the material better than the wide, open stage. (A West End theatre - smaller scale, proscenium arch, music hall tradition - would have suited immeasurably better.)

The show's spirit is distilled in the commissioning of Kylie Minogue, no less, to sing the Mah Na Mah Na nonsense song, to the surprise of her two fish-mouthed backing singers.

That said, tonight's show is just as successful when it parks the backchat and pins its heart to its sleeve, filling the stage with choral singers for a Bohemian Rhapsody refit, or jerking tears when Kermit and co gather round his swamp to sing Rainbow Connection. Kylie joins in, and the Doctor, too, part of the gang now, as powerless as the rest of us to resist the Muppets' seductive combination of warmth, wit and mischief.

Caption: Kylie Minogue was among the celebrity guests sharing the spotlight with the Muppets at the O2