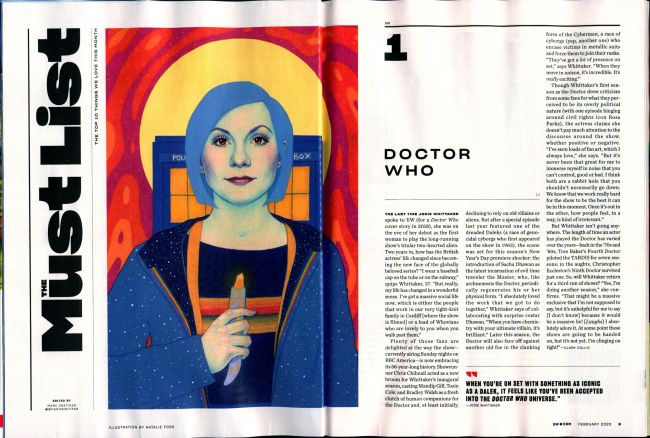 THE LAST TIME JODIE WHITTAKER spoke to EW (for a Doctor Who cover story in 2018), she was on the eve of her debut as the first woman to play the long-running show's titular two-hearted alien. Two years in, how has the British actress' life changed since becoming the new face of the globally beloved series? "I wear a baseball cap on the tube or on the subway," quips Whittaker, 37. "But really, my life has changed in a wonderful sense. I've got a massive social life now, which is either the people that work in our very tight-knit family in Cardiff [where the show is filmed] or a load of Whovians who are lovely to you when you walk past them."

Plenty of those fans are delighted at the way the show—currently airing Sunday nights on BBC America—is now embracing its 56-year-long history. Showrunner Chris Chibnall acted as a new broom for Whittaker's inaugural season, casting Mandip Gill, Tosin Cole, and Bradley Walsh as a fresh clutch of human companions for the Doctor and, at least initially, declining to rely on old villains or aliens. But after a special episode last year featured one of the dreaded Daleks (a race of genocidal cyborgs who first appeared on the show in 1963), the scene was set for this season's New Year's Day premiere shocker: the introduction of Sacha Dhawan as the latest incarnation of evil time traveler the Master, who, like archnemesis the Doctor, periodically regenerates his or her physical form. "I absolutely loved the work that we got to do together," Whittaker says of collaborating with surprise costar Dhawan. "When you have chemistry with your ultimate villain, it's brilliant." Later this season, the Doctor will also face off against another old foe in the clanking form of the Cybermen, a race of cyborgs (yep, another one) who encase victims in metallic suits and force them to join their ranks. "They've got a lot of presence on set," says Whittaker. "When they move in unison, it's incredible. It's really exciting."

Though Whittaker's first season as the Doctor drew criticism from some fans for what they perceived to be its overly political nature (with one episode hinging around civil rights icon Rosa Parks), the actress claims she doesn't pay much attention to the discourse around the show, whether positive or negative. "I've seen loads of fan art, which I always love," she says. "But it's never been that great for me to immerse myself in noise that you can't control, good or bad. I think both are a rabbit hole that you shouldn't necessarily go down. We know that we work really hard for the show to be the best it can be in this moment. Once it's out in the ether, how people feel, in a way, is kind of irrelevant."

But Whittaker isn't going anywhere. The length of time an actor has played the Doctor has varied over the years—back in the '70s and '80s, Tom Baker's Fourth Doctor piloted the TARDIS for seven seasons; in the aughts, Christopher Eccleston's Ninth Doctor survived just one. So, will Whittaker return for a third run of shows? "Yes, I'm doing another season," she confirms. "That might be a massive exclusive that I'm not supposed to say, but it's unhelpful for me to say [I don't know] because it would be a massive lie! [Laughs] I absolutely adore it. At some point these shoes are going to be handed on, but it's not yet. I'm clinging on tight!"

WHEN YOU'RE ON SET WITH SOMETHING AS ICONIC AS A DALEK, IT FEELS LIKE YOU'VE BEEN ACCEPTED INTO THE DOCTOR WHO UNIVERSE."