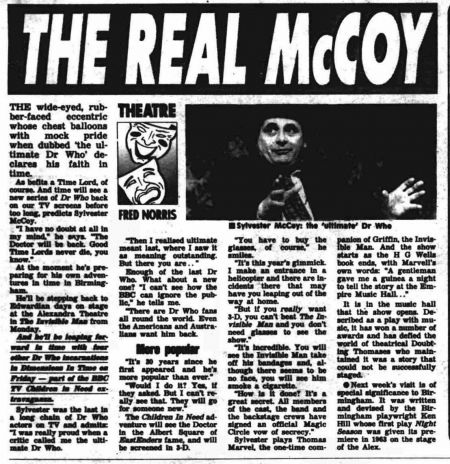 THE wide-eyed, rubber-faced eccentric whose chest balloons with mock pride when dubbed "the ultimate Dr Who' declares his faith in time.

As befits a Time Lord, of course. And time will see a new series of Dr Who back on our TV screens before too long, predicts Sylvester McCoy.

"I have no doubt at all in my mind, he says. The Doctor will be back. Good Time Lords never die, you know."

At the moment he's preparing for his own adventures in time in Birmingham.

He'll be stepping back to Edwardian days on stage at the Alexandra Theatre in The Invisible Man from Monday.

And be leaping for and the wild four other Dr Who incarnations in Dimensions in Time on Friday - part of the BBC Children in Need extravaganza.

Sylvester was the last in a long chain of Dr Who actors on TV and admits: "I was really proud when a eritic called me the ultimate Dr Who.

Then I realised ultimate meant last, where I saw it a meaning outstanding. But there you are.."

Enough of the last Dr Who. What about a new one? "I can't see how the BBC can ignore the public," he tells me.

"There are Dr Who fans all round the world. Even the Americans and Australians want him back.

"It's 30 years since he first appeared and he's more popular than ever."

"Would I do it? Yes, 1 they asked. But I can't re ally see that They will go for someone new.

The Children In Need adventure will see the Doctor in the Albert Square of EastEnders fame, and will be screened in 3-D.

"You have to buy the glasses, of course," he smiles.

"It's this year's gimmick. I make an entrance in a helicopter and there are incidents there that may have you leaping out of way at home.

"But if you really want 3-D, you can't beat The Invisible Man and you don't need glasses to see the show."

"It's Incredible. You will see the Invisible Man take off his bandages and, altogether there seems to be no face, you will see him smoke a cigarette.

"How is it done! It's a great secret. All members of the cast, the band and backstage crews have signed an official Magic Circle vow of secrecy.

Sylvester plays Thomas Marvel, the one-time companion of Griffin, the Invisible Man. And the show starts as the H G Wells book ends, with Marvell's own words: "A gentleman gave me a guinea a night to tell the story at the Empire Music Hall..."

It is in the music hall that the show opens. Described as a play with music, it has won a number of awards and has defied the world of theatrical Doubting Thomases who maintained it was a story that could not be staged successfully staged.

Next week's visit is of special significance to Birmingham. It was written by and devised by playwright Ken Hill whose first play Night Season was given its premiere in 1963 on the stage of the Alex.

Sylvester McCoy: the ultimate Dr Who