The TARDIS: Symbol of Being Human 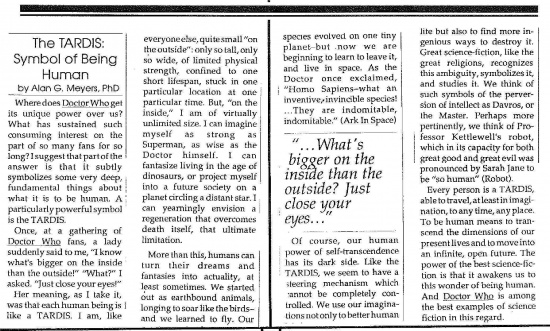 Where does Doctor Who get its unique power over us? What has sustained such consuming interest on the part of so many fans for so long? I suggest that part of the answer is that it subtly symbolizes some very deep, fundamental things about what it is to be human. A particularly powerful symbol is the TARD1S.

Once, at a gathering of Doctor Who fans, a lady suddenly said to me, "I know what's bigger on the inside than the outside!" "What?" I asked. "Just close your eyes!"

Her meaning, as I take it, was that each human being is I like a TARDIS. I am, like everyone else, quite small "on the outside": only so tall, only so wide, of limited physical strength, confined to one short lifespan, stuck in one particular location at one particular time. But, "on the inside," I am of virtually unlimited size. I can imagine myself as strong as Superman, as wise as the Doctor himself. I can fantasize living in the age of dinosaurs, or project myself into a future society on a planet circling a distant star. I can yearningly envision a regeneration that overcomes death itself, that ultimate limitation.

More than this, humans can turn their dreams and fantasies into actuality, at least sometimes. We started out as earthbound animals, longing to soar like the birds—and we learned to fly. Our species evolved on one tiny planet—but .now we are beginning to learn to leave it, and live in space. As the Doctor once exclaimed, "Homo Sapiens—what an inventive, invincible species! ...They are indomitable, indomitable." (Ark In Space)

Of course, our human power of self-transcendence has its dark side. Like the TARDIS, we seem to have a steering mechanism which cannot be completely controlled. We use our imaginations not only to better human life but also to find more ingenious ways to destroy it. Great science-fiction, like the great religions, recognizes this ambiguity, symbolizes it, and studies it. We think of such symbols of the perversion of intellect as Davros, or the Master. Perhaps more pertinently, we think of Professor Kettlewell's robot, which in its capacity for both great good and great evil was pronounced by Sarah Jane to be "so human" (Robot).

Every person is a TARDIS, able to travel, at least in imagination, to any time, any place. To be human means to transcend the dimensions of our present lives and to move into an infinite, open future. The power of the best science-fiction is that it awakens us to this wonder of being human. And Doctor Who is among the best examples of science fiction in this regard.