The Tenth Doctor: Revolutions of Terror 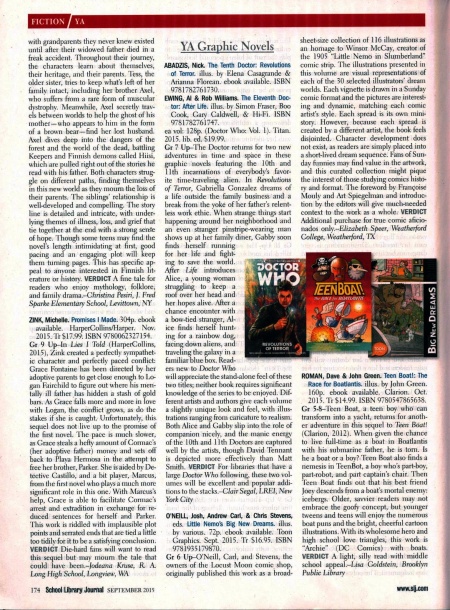 Gr 7 Up—The Doctor returns for two new adventures in time and space in these graphic novels featuring the 10th and 11th incarnations of everybody's favorite time-traveling alien. In Revolutions of Terror, Gabriella Gonzalez dreams of a life outside the family business and a break from the yoke of her father's relentless work ethic. When strange things start happening around her neighborhood and an even stranger pinstripe-wearing man shows up at her family diner, Gabby soon finds herself running for her life and fighting to save the world. After Life introduces Alice, a young woman struggling to keep a roof over her head and her hopes alive. After a chance encounter with a bow-tied stranger, Alice finds herself hunting for a rainbow dog, facing down aliens, and traveling the galaxy in a familiar blue box. Readers new to Doctor Who will appreciate the stand-alone feel of these two titles; neither book requires significant knowledge of the series to be enjoyed. Different artists and authors give each volume a slightly unique look and feel, with illustrations ranging from caricature to realism. Both Alice and Gabby slip into the role of companion nicely, and the manic energy of the 10th and 11th Doctors are captured well by the artists, though David Tennant is depicted more effectively than Matt Smith. VERDICT For libraries that have a large Doctor Who following, these two volumes will be excellent and popular additions to the stacks.—Clair Segal, LREI, New York City