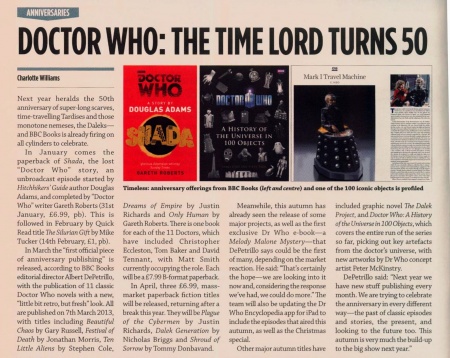 Next year heralds the 50th anniversary of super-long scarves, time-travelling Tardises and those monotone nemeses, the Daleks--and BBC Books is already firing on all cylinders to celebrate.

In March the "first official piece of anniversary publishing" is released, according to BBC Books editorial director Albert DePetrillo, with the publication of 11 classic Doctor Who novels with a new, "little bit retro, but fresh" look. All are published on 7th March 2013, with titles including Beautiful Chaos by Gary Russell, Festival of Death by Jonathan Morris, Ten Little Aliens by Stephen Cole, Dreams of Empire by Justin Richards and Only Human by Gareth Roberts. There is one book for each of the 11 Doctors, which have included Christopher Eccleston, Tom Baker and David Tennant, with Matt Smith currently occupying the role. Each will be a 7.99 [pounds sterling] B-format paperback.

In April, three 6.99 [pounds sterling], mass-market paperback fiction titles will be released, returning after a break this year. They will be Plague of the Cybermen by Justin Richards, Dalek Generation by Nicholas Briggs and Shroud of Sorrow by Tommy Donbavand.

Meanwhile, this autumn has already seen the release of some major projects, as well as the first exclusive Dr Who e-book--a Melody Malone Mystery--that DePetrillo says could be the first of many, depending on the market reaction. He said: "That's certainly the hope--we are looking into it now and, considering the response we've had, we could do more." The team will also be updating the Dr Who Encyclopedia app for iPad to include the episodes that aired this autumn, as well as the Christmas special.

Other major autumn titles have included graphic novel The Dalek Project, and Doctor Who: A History of the Universe in 100 Objects, which covers the entire run of the series so far, picking out key artefacts from the doctor's universe, with new artworks by Dr Who concept artist Peter McKinstry.

DePetrillo said: "Next year we have new stuff publishing every month. We are trying to celebrate the anniversary in every different way--the past of classic episodes and stories, the present, and looking to the future too. This autumn is very much the build-up to the big show next year."