The Time Machine in Mark's Garden 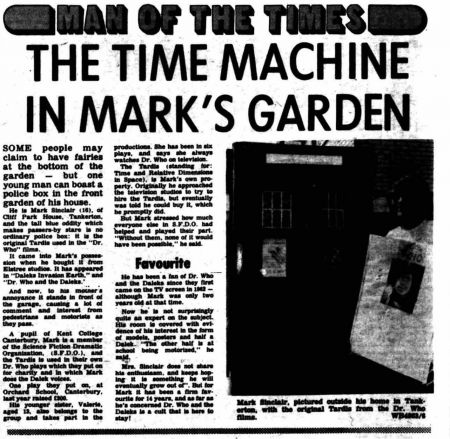 SOME people may claim to have fairies at the bottom of the garden - but one young man can boast a police box in the front garden of his house.

He is Mark Sinclair (16), of Cliff Park House, Tankerton, and the tall blue oddity which makes passers-by stare is no ordinary police box: it is the original Tardis used in the "Dr. Who" films.

It came into Mark's possession when he bought it from Elstree studios. It has appeared in "Daleks Invasion Earth," and "Dr. Who and the Daleks.

And now, to his mother's annoyance it stands in front of the garage, causing lot of comment and Interest from pedestrians and motorists as they pass.

A pupil of Kent College Canterbury. Mart a member of the Science Fiction Dramatic Organisation, (S.F.D.O.), and the Tardis is used in their own Dr. Who plays which they put on for charity and in which Mart does the Dalek voices.

One play they put on, at Orchard School, Canterbury, last year raised £800.

His younger sister, Valerie, aged is, also belongs to the group and takes part in productions. She has been in six plays, and says she always watches Dr. Who on television.

The Tardis (standing for: Time and Relative Dimensions In Space), is Mark's own property. Originally he approached the television studios" to try to hire the Tardis, but eventually was told he could buy it, which he promptly did.

But Mark stressed how much everyone else in S.F.D.O. had Sou n dlaved their "Without them, none of it would have been possible," he said.

He has been a fan of Dr. Who and the Daleks since they first came on the TV screen in 1962 - although Mark was only two years old at that time.

Now he is not surprisingly quite an expert on the subject. His room covered with evidence of his interest in the form of models, posters and half a Dalek. The other hall is at school being motorised," he said.

Mrs. Sinclair does not share his enthusiasm. and keeps hop Ing At is something he will eventually grow out of". But for Mark It has been firm favourite for 14 years, and as far as he's concerned Dr. Who and the Daleks is a cult that is here to stay!