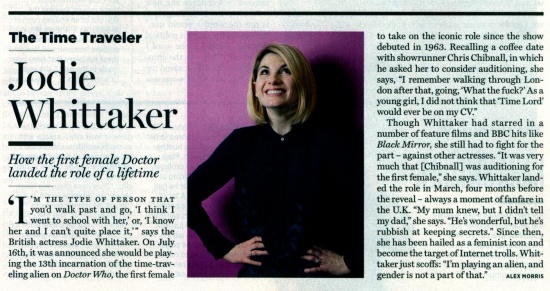 How the first female Doctor landed the role of a lifetime

I'M THE TYPE OF PERSON THAT you'd walk past and go, 'I think I went to school with her,' or, 'I know her and I can't quite place it,'" says the British actress Jodie Whittaker. On July 16th, it was announced she would be playing the 13th incarnation of the time-traveling alien on Doctor Who, the first female

to take on the iconic role since the show debuted in 1963. Recalling a coffee date with showrunner Chris Chibnall, in which he asked her to consider auditioning, she says, "I remember walking through London after that, going, 'What the fuck?' As a young girl, I did not think that 'Time Lord' would ever be on my CV."

Though Whittaker had starred in a number of feature films and BBC hits like Black Mirror, she still had to fight for the part - against other actresses. "It was very much that [Chibnall] was auditioning for the first female," she says. Whittaker landed the role in March, four months before the reveal - always a moment of fanfare in the U.K. "My mum knew, but I didn't tell my dad," she says. "He's wonderful, but he's rubbish at keeping secrets." Since then, she has been hailed as a feminist icon and become the target of Internet trolls. Whittaker just scoffs: "I'm playing an alien, and gender is not a part of that."