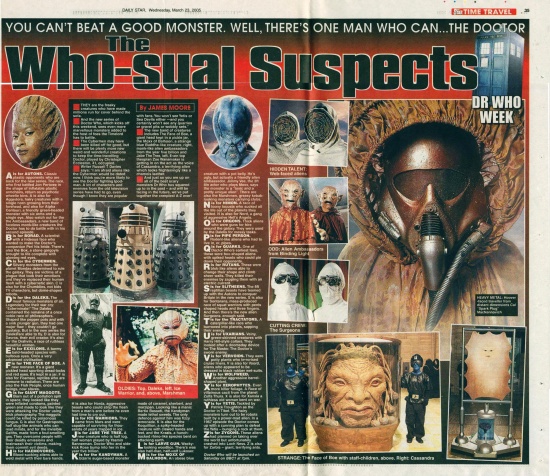 The Who-Sual Suspects; You Can't Beat A Good Monster. Well, There's One Man Who Can...The Doctor

The new band of creatures includes The Face of Boe, a giant head kept in a pickle jar, the Moxx of Balhoon, a strange blue Buddha-like creature, right, monk-like alien ambassadors from the year five billion and Jabe The Tree, left. Even top thespian Zoe Wanamaker is getting in on the act as the voice of Cassandra, a terrifying alien which looks frighteningly like a chamois leather.

And just so you are up on all of the best scary monsters Dr Who has squared up to in the past - and will be facing in the future, we've put together the creepiest A-Z ever!

A is for AUTONS. Classic plastic opponents who are back for the new series. The race, who first battled Jon Pertwee in the shape of inflatable plastic armchairs, return as psychotic wheelie bins. A is also for Aggedors, hairy creatures with a single horn growing from their forehead, and also for Alpha Centauri, a friendly green-headed monster with six arms and a single eye. Also watch out for the the Ambassadors, a new band of faceless monk-like creatures the Doctor has to do battle with in his second episode.

B is for BORAD. A scientist with a hideous face who wanted to make the Doctor's companion Peri his bride. There's also the Bok, a stone gargoyle brought to life complete with glowing red eyes.

C is for the CYBERMEN.

Silvery monsters from the planet Mondas determined to rule the galaxy. They are victims of a plague that took their emotions and they've replaced their human flesh with a cybernetic skin. C is also for the Chumblies, not kids TV characters, but dome-shaped robots.

D is for the DALEKS. The most famous monsters of all.

Legendary for their war cry:

"Exterminate!" The Daleks contained the remains of a once noble race of philosophers.

Shaped like pepper pots and with a sink plunger gun, they had one major flaw - they couldn't go upstairs. But in the new series the Daleks are able to fly. D is also for Davros, their evil creator. It's also for the Drahvin, a race of ruthless beautiful women.

E is for EXXILONS. A barmy bald-headed species with bulbous eyes. Once a very advanced civilisation.

F is for THE FACE OF BOE. A new monster. It's a giant pickled head sporting dread-locks and red eyes. It's kept in a jar. F is also for Foamasi, reptiles who are immune to radiation. There are also the Fish People, once human beings, now slaves.

G is for GIANT MAGGOTS. Born out of a pollution spill in space, they looked like they were inflated condoms, painted green and made to look like they were attacking the Doctor using trick photography. The maggots could be killed by poisonous fungus. G is also for Gastropods, half slug-like animals who can read minds, and for the invisible Gelths, made from a foul-smelling gas. They overcome people with their deadly emissions and brainwash their victims, making them commit evil deeds.

H is for HAEMOVORES. Blood-sucking aliens able to weld metal with their bare hands.

THEY are the freaky creatures who have made millions run for cover behind the sofa.

And the new series of Doctor Who, which kicks off this weekend, sees even more marvellous monsters added to the host of foes the Timelord has to battle.

The Cybermen may have been killed off for good, but there will be plenty more new weird and wonderful creations to keep the time-travelling Doctor, played by Christopher Eccleston, 41, occupied.

Writer Russell T Davies says: "I am afraid aliens like the Cybermen would be dated now. I think you're more likely to see the Doctor fighting Ipodman. A lot of characters and enemies from the old television series have had to go, even though I know they are popular H is also for Horda, aggressive beasts who could strip the flesh from a man's arm before he even had time to cry out.

I is for ICE WARRIORS. They came from Mars and were capable of surviving for thousands of years trapped in ice.

J is for JABE THE TREE. A new creature who is half log, half woman played by Yasmin Bannerman. Doctor Who and sidekick Rose bump into her in the year five billion.

K is for the KANDYMAN. A bizarre sugar-based monster with fans. You won't see Yetis or Sea Devils either --and you certainly won't see any quarries or gravel pits or wobbly sets."

made of caramel, sherbert, and marzipan. Looking like a manic Bertie Bassett, the Kandyman made lethal sweets. The only defence against him was fizzy lemonade. K is also for the Koquillion, a spiky-headed creature with clawed hands and feet, and the Kraals, a hunchbacked rhino-like species bent on attacking earth.

M is for the MOXX OF BALHOON. An obese blue creature with a pot belly. He's ugly, but actually a friendly alien ambassador. Jimmy Vee, the 3ft 8in actor who plays Moxx, says the monster is a "toxic and a pretty unique alien". There are also the Marshmen, greasy kebablooking monsters carrying clubs.

N is for NIMON. A race of loony locusts who sucked all the life out of the planets they visited. N is also for Nord, a gang of aggressive Hell's Angels.

O is for ORGONS. Thick aliens who were guns for hire around the galaxy. They were used by the Daleks for messy tasks.

P is for PIPE PERSON. Rodent-like aliens who had to live in, er, pipes.

Q is for QUARKS. One of Doctor Who's earliest foes, these were box-shaped aliens with spiked heads who could pin down their opponents.

R is for RUTANS. These were blob like aliens able to change their shape and climb sheer walls. They killed their enemies by zapping them with an electric current.

S is for SLITHEENS. The 8ft reptilian beasts have teamed up with the Autons to conquer Britain in the new series. S is also for Sontarans, mass-produced race of squat warriors with penis shaped heads and three fingers.

And then there's the new alien Surgeons, enough said.

T is for the TRACTATORS. A caterpillar-like race who burrowed into planets, sapping their energy.

U is for UXARIANS. Ve iny, green-skinned creatures with Harry Hill-style collars. They looked after a doomsday device for The Master, The Doctor's sworn enemy.

V is for VERVOIDS. They were potty plants who terrorised cruise liners. V is also for Voord, aliens who appeared to be dressed in black rubber wet-suits.

Xis for XEROPHYTES. Even more killer foliage. A Race of villainous cacti from the planet Zolfa Thura. X is also for Xanxia a ruthless old woman bent on war.

Y is for YETIS. Tack led by Patrick Troughton as the Doctor in Tibet. The hairy monsters turn out to be robots built by a power-mad alien. In a 1967 episode the Doctor comes up with a cunning plan to defeat the Yetis - bunging a rock at them.

Z is for ZYGONS. These aliens had planned on taking over the world but unfortunately crashed into Loch Ness. Z is also for Zarbis - giant, terrifying ants.