The day my knees turned blue 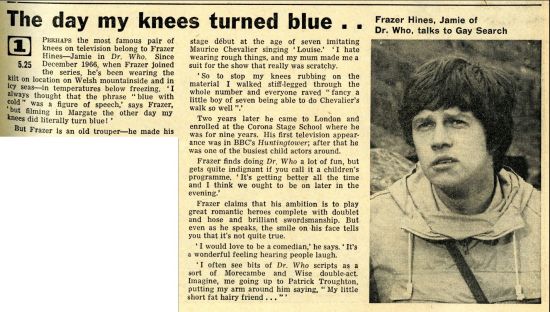 Frazer Hines, Jamie of Dr. Who, talks to Gay Search

PERHAPS the most famous pair of knees on television belong to Frazer Hines—Jamie in Dr. Who. Since 5.25 December 1966, when Frazer joined the series, he's been wearing the kilt on location on Welsh mountainside and in icy seas—in temperatures below freezing. 'I always thought that the phrase "blue with cold" was a figure of speech,' says Frazer, but filming in Margate the other day my knees did literally turn blue!'

But Frazer is an old trouper—he made his stage d6but at the age of seven imitating Maurice Chevalier singing Louise." I hate wearing rough things, and my mum made me a suit for the show that really was scratchy.

'So to stop my knees rubbing on the material I walked stiff-legged through the whole number and everyone raved " fancy a little boy of seven being able to do Chevalier's walk so well".'

Two years later he came to London and enrolled at the Corona Stage School where he was for nine years. His first television appearance was in BBC's Huntingtower; after that he was one of the busiest child actors around.

Frazer finds doing Dr. Who a lot of fun, but gets quite indignant if you call it a children's programme. It's getting better all the time and I think we ought to be on later in the evening.'

Frazer claims that his ambition is to play great romantic heroes complete with doublet and hose and brilliant swordsmanship. But even as he speaks, the smile on his face tells you that it's not quite true.

'I would love to be a comedian,' he says. It's a wonderful feeling hearing people laugh.

'I often see bits of Dr. Who scripts as a sort of Morecambe and Wise double-act. Imagine, me going up to Patrick Troughton, putting my arm around him saying, " My little short fat hairy friend ..."'