The end is nigh 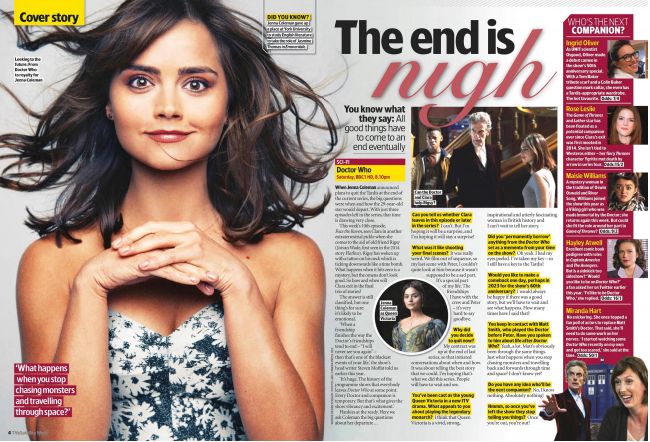 You know what they say: All good things have to come to an end eventually

When Jenna Coleman announced plans to quit the Tardis at the end of the current series, the big questions were when and how the 29-year-old star would depart. With just three episodes left in the series, that time is drawing very close.

This week's 10th episode, Face the Raven, sees Clara in another extraterrestrial pickle when she comes to the aid of old friend Rigsy (Joivan Wade, first seen in the 2014 story Flatline). Rigsy has woken up with a tattoo on his neck which is ticking downwards like a time bomb. What happens when it hits zero is a mystery, but the omens don't look good. So how and when will Clara exit in the final trio of stories?

The answer is still classified, but one thing's for sure: it's likely to be emotional.

'When a friendship finishes the way the Doctor's friendships tend to end — "I will never see you again" — then that's one of the blackest events of your life,' the show's head writer Steven Moffat told us earlier this year.

'It's huge. The history of the programme shows that everybody leaves Doctor Who at some point. Every Doctor and companion is temporary. But that's what gives the show vibrancy and excitement.'

Hankies at the ready. Here we ask Coleman the big questions about her departure... Can the Doctor and Clara help Rigsy?

Can you tell us whether Clara leaves in this episode or later in the series?

It was really weird. We film out of sequence, so my last scene with Peter, I couldn't quite look at him because it wasn't supposed to be a sad part. It's a special part of my life. The friendships I have with the crew and Peter — it's very hard to say goodbye.

Why did you decide to quit now?

My contract was up at the end of last series, so that initiated conversations about when and how. It was about telling the best story that we could. I'm hoping that's what we did this series. People will have to wait and see.

You've been cast as the young Queen Victoria in a new ITV drama. What appeals to you about playing the legendary monarch?

I think that Queen Victoria is a vivid, strong, inspirational and utterly fascinating woman in British history and I can't wait to tell her story.

Did you 'permanently borrow' anything from the Doctor Who set as a memento from your time on the show?

Oh yeah. I had my eyes peeled. I've taken my key — so I still have a key to the Tardis!

Would you like to make a comeback one day, perhaps in 2023 for the show's 60th anniversary?

I would always be happy if there was a good story, but we'll have to wait and see what happens. How many times have I said that?

You keep in contact with Matt Smith, who played the Doctor before Peter. Have you spoken to him about life after Doctor Who?

Yeah, a lot. Matt's obviously been through the same things. Just what happens when you stop chasing monsters and travelling back and forwards through time and space? I don't know yet?

Do you have any idea who'll be the next companion?

No, I know nothing. Absolutely nothing!

Hmmm, so once you've left the show they stop telling you things?

Jenna Coleman gave up a pace at York University to study English literature to take the role of Jasmine Thomas in Emmerdale.

Caption: Looking to the future: From Doctor Who to royalty for Jenna Coleman

WHO'S THE NEXT COMPANION?

As UNIT scientist Osgood, Oliver made a debut cameo in the show's 50th anniversary special. With a Tom Baker tribute scarf and a Colin Baker question mark collar, she even has a Tardis-appropriate wardrobe. The hot favourite. Odds: 7/4

The Game of Thrones and Luther star has been floated as a potential companion ever since Clara's exit was first mooted in 2014. She isn't tied to Westeros either — her fiery Thrones character Ygritte met death by arrow in series four. Odds:15/2

A mystery woman in the tradition of Oswin Oswald and River Song, Williams joined the show this year as a Viking girl who was made immortal by the Doctor; she returns again this week. But could she fit the role around her part in Game of Thrones? Odds: 9/2

Excellent comic book pedigree with roles in Captain America and The Avengers. But is a sidekick too sideshow? 'Would you like to be on Doctor Who?' a fan asked her on Twitter earlier this year. 'I'd like to be Doctor Who,' she replied. Odds:16/1

No snickering. She once topped a fan poll of actors to replace Matt Smith's Doctor. That said, she'll need to do some work on her nerves. 'I started watching some Doctor Who recently on my own and got too scared,' she said at the time. Odds: 50/1