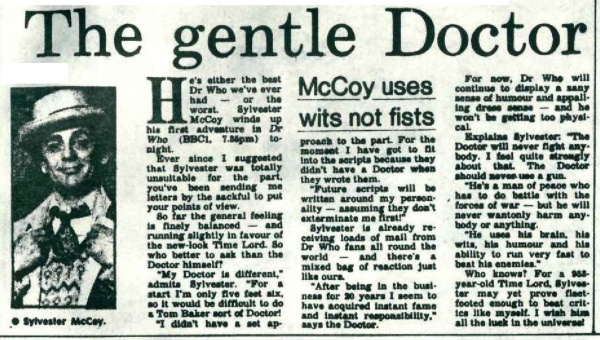 He's either the beat Dr Who we've ever had — or the worst. Sylvester McCoy winds up his first adventure in Dr Who (BBC1, 7.35pm) tonight.

Ever since I suggested that Sylvester wan totally unsuitable for the part, you've been sending me letters by the sackful to put your points of view.

So far the general feeling is finely balanced — and running slightly in favour of the new-look Time Lord. So who better to ask than the Doctor himself?

"My Doctor is different," admits Sylvester. "For a start I'm only five foot six, so it would be difficult to do a Tom Baker sort of Doctor!

"I didn't have a set approach to the part. For the moment I have got to fit into the scripts because they didn't have a Doctor when they wrote them.

"Future scripts will be written around my personality — assuming they don't exterminate me first!" Sylvester is already receiving load, of mail from Dr Who fans all round the world — and there's a mixed bag of reaction just like ours.

"After being in the business for 20 years I seem to have acquired instant fame and instant responsibility." says the Doctor.

For now, Dr Who will continue to display a zany sense of humour and appalling dress sense — and he won't be getting too physical.

Explains Sylvester: "The Doctor will never fight anybody. I feel quite strongly about that. The Doctor should never use a gun.

"He's a man of peace who has to do battle with the forced of war — but he will never wantonly harm anybody or anything.

"He uses his brain, his wits, his humour and his ability to run very fast to beat his enemies."

Who knows? For a 953-year-old Time Lord, Sylvester may yet prove fleet-footed enough to best critics like myself. I wish him all the luck in the universe.