The grooviest Doctor yet -- and he plays guitar 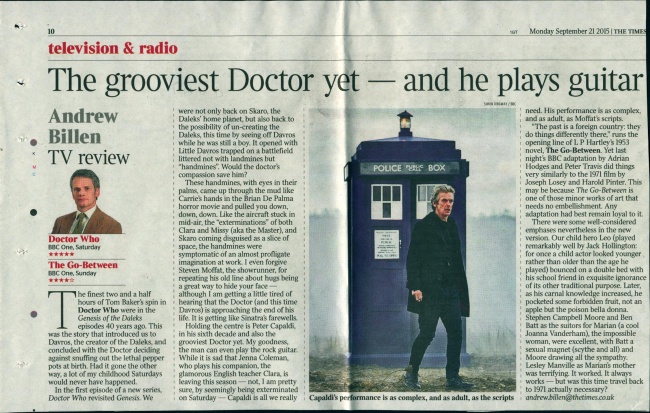 The finest two and a half hours of Tom Baker's spin in Doctor Who were in the Genesis of the Daleks episodes 40 years ago. This was the story that introduced us to Davros, the creator of the Daleks, and concluded with the Doctor deciding against snuffing out the lethal pepper pots at birth. Had it gone the other way, a lot of my childhood Saturdays would never have happened.

In the first episode of a new series, Doctor Who revisited Genesis. We were not only back on Skaro, the Daleks' home planet, but also back.to the possibility of un-creating the Daleks, this time by seeing off Davros while he was still a boy. It opened with Little Davros trapped on a battlefield littered not with landmines but "handmines". Would the doctor's compassion save him?

These handmines, with eyes in their palms, came up through the mud like Carrie's hands in the Brian De Palma horror movie and pulled you down, down, down. Like the aircraft stuck in mid-air, the "exterminations" of both Clara and Missy (aka the Master), and Skaro coming disguised as a slice of space, the handmines were symptomatic of an almost profligate imagination at work. I even forgive Steven Moffat, the showrunner, for repeating his old line about hugs being a great way to hide your face —although I am getting a little tired of hearing that the Doctor (and this time Davros) is approaching the end of his life. It is getting like Sinatra's farewells.

Holding the centre is Peter Capaldi, in his sixth decade and also the grooviest Doctor yet. My goodness, the man can even play the rock guitar. While it is sad that Jenna Coleman, who plays his companion, the glamorous English teacher Clara, is leaving this season — not, I am pretty sure, by seemingly being exterminated on Saturday — Capaldi is all we really Capaldi's performance is as complex, and as adult, as the scripts need. His performance is as complex, and as adult, as Moffat's scripts.