The last flight of Doctor Whoaah 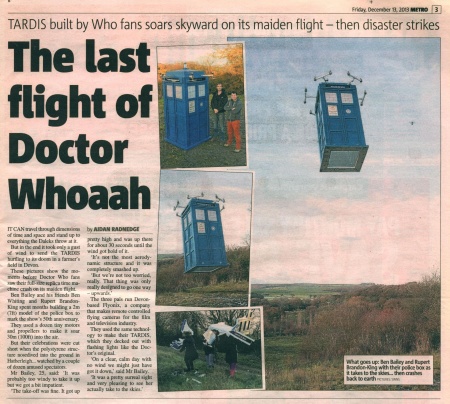 Caption: What goes up: Ben Bailey and Rupert Brandon-King with their police box as it takes to the skies... then crashes back to earth

IT CAN travel through dimensions of time and space and stand up to everything the Daleks throw at it. But in the end it took only a gust of wind to send the TARDIS hurtling to its doom in a farmer's field in Devon.

These pictures show the moments before Doctor Who fans saw their full-size replica time machine crash on its maiden flight. Ben Bailey and his friends Ben Whiting and Rupert Brandon-King spent months building a 2m (7ft} model of the police box to mark the show's 50th anniversary. They used a dozen tiny motors and propellers to make it soar 30m (100ft) into the air.

But their celebrations were cut short when the polystyrene structure nosedived into the ground in Hatherleigh... watched by a couple of dozen amused spectators.

Mr Bailey, 25, said: 'It was probably too windy to take it up but we got a bit impatient.

'The take-off was fine. It got up pretty high and was up there for about 30 seconds until the wind got hold of it.

'It's not the most aerodynamic structure and it was completely smashed up.

'But we're not too worried, really. That thing was only really designed to go one way — upwards.'

The three pals run Devon-based Flyonix, a company that makes remote controlled flying cameras for the film and television industry.

They used the same technology to make their TARDIS, which they decked out with flashing lights like the Doctor's original.

'On a clear, calm day with no wind we might just have got it down,' said Mr Bailey.

'It was a pretty surreal sight and very pleasing to see her actually take to the skies.'