The latest incarnation of 'Dr. Who' is playfully pleasant 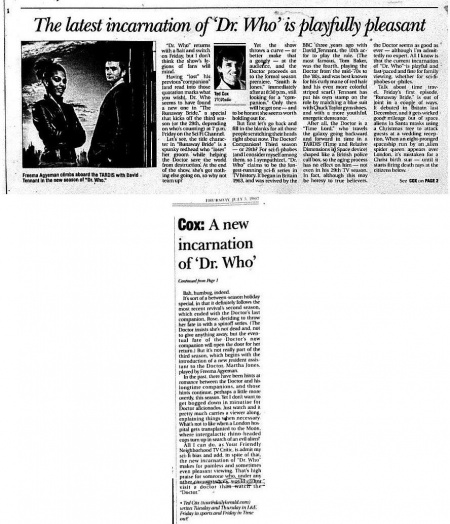 "Dr. Who" returns with a bait and switch on Friday, but I don't think the show's legions of fans will mind.

Having "lost" his previous "companion" (and read into those quotation marks what you wish), Dr. Who seems to have found a new one in "The Runaway Bride," a special that kicks off the third season (or the 29th, depending on who's counting) at 7 p.m. Friday on the Sci Fi Channel.

Let's see, the title character in "Runaway Bride" is a spunky redhead who "loses" her groom while helping the Doctor save the world from destruction. At the end of the show, she's got nothing else going on, so why not team up?

Yet the show throws a curve - or better make that a googly - at the audience, and the Doctor proceeds on to the formal season premiere, "Smith & Jones," immediately after at 8:30 p.m., still looking for a "companion." Only then will he get one - and to be honest she seems worth holding out for.

But first let's go back and fill in the blanks for all those people scratching their heads right about now. The Doctor? Companion? Third season - or 29th? For sci-fi-phobes (and I consider myself among them, so I sympathize), " Dr. Who " claims to be the longest-running sci-fi series in TV history. It began in Britain 1963, and was revived by the BBC three years ago with David Tennant, the 10th actor to play the role. (The most famous, Tom Baker, was the fourth, playing the Doctor from the mid-'70s to the '80s, and was best known for his curly mane of red hair and his even more colorful striped scarf.) Tennant has put his own stamp on the role by matching a blue suit with Chuck Taylor gym shoes, and with a more youthful, energetic demeanor.

After all, the Doctor is a "Time Lord," who travels the galaxy going backward and forward in time in a TARDIS (Time and Relative Dimensions in Space device) shaped like a British police call box, so the aging process has no effect on him - not even in his 29th TV season. In fact, although this may be heresy to true believers, the Doctor seems as good as ever - although I'm admittedly no expert. All I know is that the current incarnation of " Dr. Who " is playful and fast-paced and fine for family viewing, whether for sci-fiphobes or -philes.

Talk about time travel, Friday's first episode, "Runaway Bride," is out of joint in a couple of ways. It debuted in Britain last December, and it gets wicked good mileage out of space aliens in Santa masks using a Christmas tree to attack guests at a wedding reception. When an eight-pronged spaceship run by an alien spider queen appears over London, it's mistaken for a Christ birth star - until it starts firing death rays at the citizens below.

It's sort of a between-season holiday special, in that it definitely follows the most recent revival's second season, which ended with the Doctor's last companion, Rose, deciding to throw her fate in with a spin-off series. (The Doctor insists she's not dead and, not to give anything away, but the eventual fate of the Doctor's new companion will open the door for her return.) But it's not really part of the third season, which begins with the introduction of a new resident assistant to the Doctor, Martha Jones, played by Freema Agyeman.

In the past, there have been hints at romance between the Doctor and his longtime companions, and those hints continue, perhaps a little more overtly, this season. Yet I don't want to get bogged down in minutiae for Doctor aficionados. Just watch and it pretty much carries a viewer along, explaining things when necessary. What's not to like when a London hospital gets transplanted to the Moon, where intergalactic rhino-headed cops turn up in search of an evil alien?

All I can do, as Your Friendly Neighborhood TV Critic, is admit my sci-fi bias and add, in spite of that, the new incarnation of " Dr. Who " makes for painless and sometimes even pleasant viewing. That's high praise for someone who, under any other circumstances, would rather visit a doctor than watch the "Doctor."

- Ted Cox (tcox@@dailyherald.com) writes Tuesday and Thursday in L&E, Friday in sports and Friday in Time out!