The lion, the witch & the Tardis 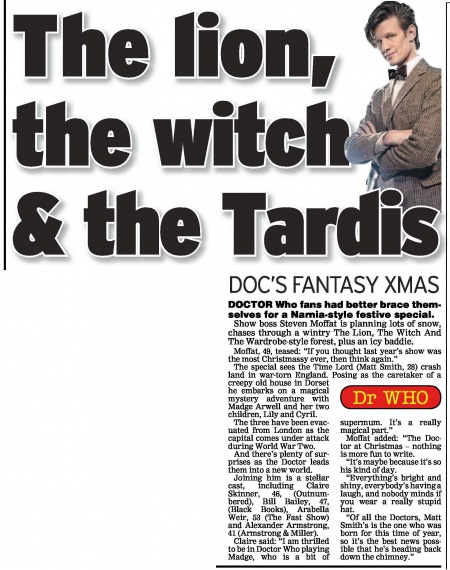 DOCTOR Who fans had better brace themselves for a Narnia-style festive special.

Show boss Steven Moffat is planning lots of snow, chases through a wintry The Lion, The Witch And The Wardrobe-style forest, plus an icy baddie.

Moffat, 49, teased: "If you thought last year's show was the most Christmassy ever, then think again."

The special sees the Time Lord (Matt Smith, 28) crash land in war-torn England. Posing as the caretaker of a creepy old house in Dorset he embarks on a magical mystery adventure with Madge Arwell and her two children, Lily and Cyril.

The three have been evacuated from London as the capital comes under attack during World War Two.

And there's plenty of surprises as the Doctor leads them into a new world.

Claire said: "I am thrilled to be in Doctor Who playing Madge, who is a bit of supermum. It's a really magical part."

Moffat added: "The Doctor at Christmas — nothing is more fun to write.

"It's maybe because it's so his kind of day.

"Everything's bright and shiny, everybody's having a laugh, and nobody minds if you wear a really stupid hat.

"Of all the Doctors, Matt Smith's is the one who was born for this time of year, so it's the best news possible that he's heading back down the chimney."