The man who invented the Daleks 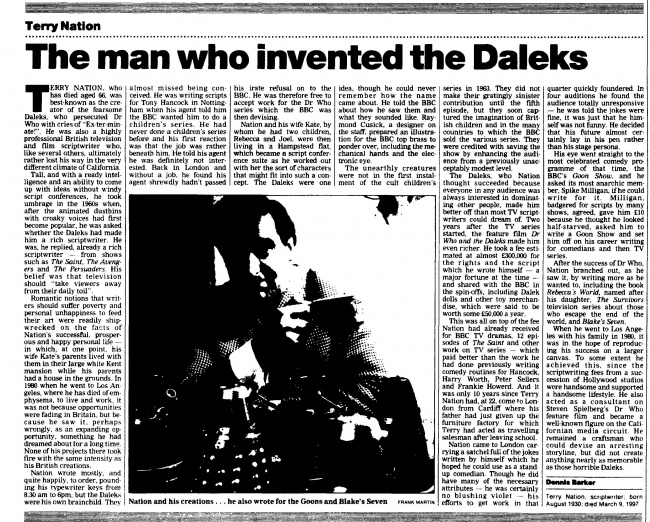 TERRY NATION, who has died aged 66, was best-known as the creator of the fearsome Daleks, who persecuted Dr Who with cries of "Ex-terminate!". He was also a highly professional British television and film scriptwriter who, like several others, ultimately rather lost his way in the very different climate of California.

Tall, and with a ready intelligence and an ability to come up with ideas without windy script conferences, he took umbrage in the 1960s when, after the animated dustbins with croaky voices had first become popular, he was asked whether the Daleks had made him a rich scriptwriter. He was, he replied, already a rich scriptwriter --- from shows such as The Saint, The Avengers and The Persuaders. His belief was that television should "take viewers away from their daily toil".

Romantic notions that writers should suffer poverty and personal unhappiness to feed their art were readily shipwrecked on the facts of Nation's successful, prosperous and happy personal life -in which, at one point, his wife Kate's parents lived with them in their large white Kent mansion while his parents had a house in the grounds. In 1980 when he went to Los Angeles, where he has died of emphysema, to live and work, it was not because opportunities were fading in Britain, but because he saw it, perhaps wrongly, as an expanding opportunity, something he had dreamed about for a long time. None of his projects there took fire with the same intensity as his British creations.

Nation wrote mostly, and quite happily, to order, pounding his typewriter keys from 8.30 am to 6pm, but the Daleks were his own brainchild. They almost missed being conceived. He was writing scripts for Tony Hancock in Nottingham when his agent told him the BBC wanted him to do a children's series. He had never done a children's series before and his first reaction was that the job was rather beneath him. He told his agent he was definitely not interested. Back in London and without a job, he found his agent shrewdly hadn't passed his irate refusal on to the BBC. He was therefore free to accept work for the Dr Who series which the BBC was then devising.

Nation and his wife Kate, by whom he had two children, Rebecca and Joel. were then living in a Hampstead flat, which became a script conference suite as he worked out with her the sort of characters that might fit into such a concept. The Daleks were one idea, though he could never remember how the name came about. He told the BBC about how he saw them and what they sounded like. Raymond Cusick, a designer on the staff prepared an illustration for the BBC top brass to ponder over, including the mechanical hands and the electronic eye.

The unearthly creatures were not in the first instalment of the cult children's series in 1963. They did not make their gratingly sinister contribution until the fifth episode, but they soon captured the imagination of British children and in the many countries to which the BBC sold the various series. They were credited with saving the show by enhancing the audience from a previously unacceptably modest level.

The Daleks, who Nation thought succeeded because everyone in any audience was always interested in dominating other people, made him better off than most TV scriptwriters could dream of. Two years after the TV series started, the feature film Dr Who and the Daleks made him even richer. He took a fee estimated at almost £300,000 for the rights and the script which he wrote himself — a major fortune at the time — and shared with the BBC in the spin-offs, including Dalek dolls and other toy merchandise, which were said to be worth some £50,000 a year.

This was all on top of the fee Nation had already received for BBC TV dramas, 12 episodes of The Saint and other work on TV series — which paid better than the work he had done previously writing comedy routines for Hancock, Harry Worth, Peter Sellers and Frankie Howerd. And it was only 10 years since Terry Nation had, at 22, come to London from Cardiff where his father had just given up the furniture factory for which Terry had acted as travelling salesman after leaving school.

Nation came to London carrying a satchel full of the jokes written by himself which he hoped he could use as a standup comedian. Though he did have many of the necessary attributes — he was certainly no blushing violet -- his efforts to get work in that quarter quickly foundered. In four auditions he found the audience totally unresponsive — he was told the jokes were fine, it was just that he himself was not funny. He decided that his future almost certainly lay in his pen rather than his stage persona.

His eye went straight to the most celebrated comedy programme of that time, the BBC's Goon Show, and he asked its most anarchic member, Spike Milligan, if he could write for it. Milligan, badgered for scripts by many shows, agreed, gave him £10 because he thought he looked half-starved, asked him to write a Goon Show and set him off on his career writing for comedians and then TV series.

After the success of Dr Who, Nation branched out, as he saw it, by writing more as he wanted to, including the book Rebecca's World, named after his daughter, The Survivors television series about those who escape the end of the world, and Blake's Seven.

When he went to Los Angeles with his family in 1980, it was in the hope of reproducing his success on a larger canvas. To some extent he achieved this, since the scriptwriting fees from a succession of Hollywood studios were handsome and supported a handsome lifestyle. He also acted as a consultant on Steven Spielberg's Dr Who feature film and became a well-known figure on the Californian media circuit. He remained a craftsman who could devise an arresting storyline, but did not create anything nearly as memorable as those horrible Daleks.

Caption: Nation and his creations ... he also wrote for the Goons and Blake's Seven