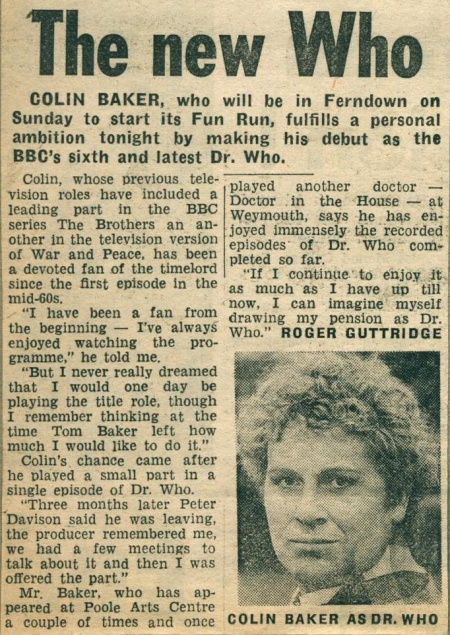 COLIN BAKER, who will be in Ferndown on Sunday to start its Fun Run, fulfills a personal ambition tonight by making his debut as the BBC's sixth and latest Dr. Who.

Colin, whose previous television roles have included a leading part in the BBC series The Brothers an another in the television version of War and Peace, has been a devoted fan of the timelord since the first episode in the mid-60s.

"I have been a fan from the beginning — I've always enjoyed watching the programme," he told me.

"But I never really dreamed that I would one day be playing the title role, though I remember thinking at the time Tom Baker left how much I would like to do it."

Colin's chance came after he played a small part in a single episode of Dr. Who.

"Three months later Peter Davison said he was leaving, the producer remembered me, we had a few meetings to talk about it and then I was offered the part."

Mr. Baker, who has appeared at Poole Arts Centre a couple of times and once played another doctor —Doctor in the House — at Weymouth, says he has enjoyed immensely the recorded episodes of Dr. Who completed so far.

"If I continue 'AO enjoy it as much as I have up till now, I can imagine myself drawing my pension as Dr. Who."

Caption: COLIN BAKER AS DR. WHO