The new sound of music 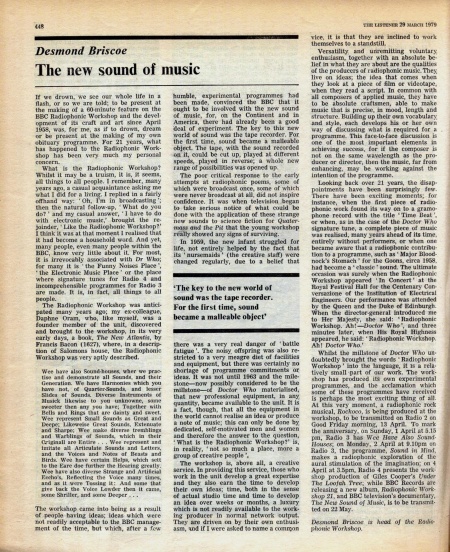 If we drown, we see our whole life in a flash, or so we are told; to be present at the making of a 60-minute feature on the BBC Radiophonic Workshop and the development of its craft and art since April 1958, was, for me, as if to drown, dream or be present at the making of my own obituary programme. For 21 years, what has happened to the Radiophonic Workshop has been very much my personal concern.

What is the Radiophonic Workshop? Whilst it may be a truism, it is, it seems, all things to all people. I remember, many years ago, a casual acquaintance asking me what I did for a living. I replied in a fairly offhand way: ' Oh, I'm in broadcasting '; then the natural follow-up, ' What do you do? ' and my casual answer, ' I have to do with electronic music,' brought the rejoinder, ' Like the Radiophonic Workshop?' I think it was at that moment I realised that it had become a household word. And yet, many people, even many people within the BBC, know very little about it. For most, it is irrevocably associated with Dr Who; for many it is ' the Funny Noises Place ', ' the Electronic Music Place ' or the place where signature tunes for Radio 4 and incomprehensible programmes for Radio 3 are made. It is, in fact, all things to all people.

Wee have also Sound-houses, wher we practise and demonstrate all Sounds, and their Generation. We have Harmonies which you have not, of Quarter-Sounds, and lesser Slides of Sounds. Diverse Instruments of Musick likewise to you unknowne, some sweeter then any you have; Together with Bells and Rings that are dainty and sweet. Wee represent Small Sounds as Great and Deepe; Likeweise Great Sounds, Extenuate and Sharpe; Wee make diverse tremblings and Warblings of Sounds, which in their Oziginall are Entire ... Wee represent and imitate all Articulate Sounds and Letters, and the Voices and Notes of Beasts and Birds. Wee have certain Helps, which sett to the Eare doe further the Hearing greatly. Wee have also diverse Strange and Artificial Eccho's, Reflecting the Voice many times, and as it were Tossing it: And some that give back the Voice Lowder then it came, some Shriller, and some Deeper ...

The workshop came into being as a result of people having ideas; ideas which were not readily acceptable to the BBC management of the time, but which, after a few humble, experimental programmes had been made, convinced the BBC that it ought to be involved with the new sound of music, for, on the Continent and in America, there had already been a good deal of experiment. The key to this new world of sound was the tape recorder. For the first time, sound became a malleable object. The tape, with the sound recorded on it, could be cut up, played at different speeds, played in reverse; a whole new range of possibilities was opened up.

The poor critical response to the early attempts at radiophonic poems, some of which were broadcast once, some of which were never broadcast at all, did not inspire confidence. It was when television began to take serious notice of what could be done with the application of these strange new sounds to science fiction for Quatermass and the Pit that the young workshop really showed any signs of surviving.

In 1959, the new infant struggled for life, not entirely helped by the fact that its ' nursemaids ' (the creative staff) were changed regularly, due to a belief that there was a very real danger of ' battle fatigue '. The noisy, offspring was also restricted to a very meagre diet of facilities and equipment, but there was certainly no shortage of programme commitments or ideas. It was not until 1963 and the milestone—now possibly considered to be the millstone—of Doctor Who materialised, that new professional equipment, in any, quantity, became available to the unit. It is a fact, though, that all the equipment in the world cannot realise an idea or produce a note of music; this can only be done by, dedicated, self-motivated men and women and therefore the answer to the question, ' What is the Radiophonic Workshop?' is, in reality, ' not so much a place, more a group of creative people '.

The workshop is, above all, a creative service. In providing this service, those who work in the unit develop a great expertise and they also earn the time to develop their own ideas; time, both in the sense of actual studio time and time to develop an idea over weeks or months, a luxury which is not readily available to the working producer in normal network output. They are driven on by their own enthusiasm, and if I were asked to name a common vice, it is that they are inclined to work themselves to a standstill.

Versatility and unremitting voluntary enthusiasm, together with an absolute belief in what they are about are the qualities of the producers of radiophonic music. They, live on ideas; the idea that comes when they look at a piece of film or videotape, when they read a script. In common with all composers of applied music, they have to be absolute craftsmen, able to make music that is precise, in mood, length and structure. Building up their own vocabulary. and style, each develops his or her own way of discussing what is required for a programme. This face-to-face discussion is one of the most important elements in achieving success, for if the composer is not on the same wavelength as the producer or director, then the music, far from enhancing, may be working against the intention of the programme.

Looking back over 21 years, the disappointments have been surprisingly few. There have been exciting moments; for instance, when the first piece of radio-phonic work found its way on to a gramophone record with the title ' Time Beat or when, as in the case of the Doctor Who signature tune, a complete piece of music was realised, many years ahead of its time, entirely without performers, or when one became aware that a radiophonic contribution to a programme, such as ' Major Bloodnock's Stomach ' for the Goons, circa 1958, had become a ' classic ' sound. The ultimate occasion was surely when the Radiophonic Workshop appeared ' In Concert ' at the Royal Festival Hall for the Centenary Conversazione of the Institution of Electrical Engineers. Our performance was attended by the Queen and the Duke of Edinburgh. When the director-general introduced me to Her Majesty, she said: ' Radiophonic Workshop. Ah ! —Doctor Who ', and three minutes later, when His Royal Highness appeared, he said: ' Radiophonic Workshop. Ah ! Doctor Who.'

Whilst the millstone of Doctor Who undoubtedly brought the words ' Radiophonic Workshop ' into the language, it is a relatively small part of our work. The workshop has produced its own experimental programmes, and the acclamation which some of these programmes have received is perhaps the most exciting thing of all. At this very moment, a radiophonic rock musical, Rockoco, is being produced at the workshop, to be transmitted on Radio 2 on Good Friday morning, 13 April. To mark the anniversary, on Sunday, 1 April at 5.15 pm, Radio 3 has Wee Have Also Sound-Houses; on Monday, 2 April at 9.10pm on Radio 3, the programme, Sound in Mind, makes a radiophonic exploration of the aural stimulation of the imagination; on 4 April at 3.5pm, Radio 4 presents the workshop production of Giles Cooper's Under The Loofah Tree; while BBC Records are releasing a new album, Radiophonic Workshop 21, and BBC television's documentary, The New Sound of Music, is to be transmitted on 22 May.

Desmond Briscoe is head of the Radiophonic Workshop.