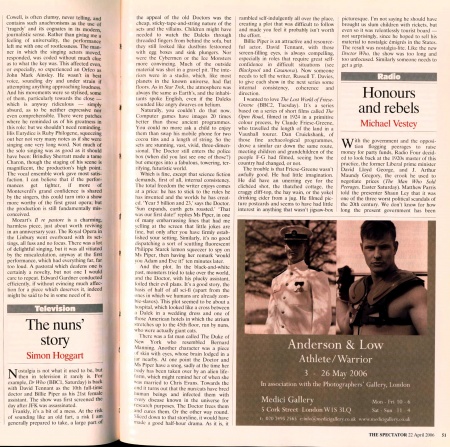 Nostalgia is not what it used to be, but then in television it rarely is. For example, Dr Who (BBC1, Saturday) is back with David Tennant as the 10th full-time doctor and Billie Piper as his 21st female assistant. The show was first screened the day after JFK was assassinated.

Frankly, it's a bit of a mess. At the risk of sounding like an old fart, a risk I am generally prepared to take, a large part of the appeal of the old Doctors was the cheap, sticky-tape-and-string nature of the sets and the villains. Children might have needed to watch the Daleks through threaded fingers from behind the sofa, but they still looked like dustbins festooned with egg boxes and sink plungers. Nor were the Cybermen or the Ice Monsters more convincing. Much of the outside material was shot in a gravel pit. The interiors were in a studio, which, like most planets in the known universe, had flat floors. As in Star Trek, the atmosphere was always the same as Earth's, and the inhabitants spoke English, even if the Daleks sounded like angry dwarves on helium.

Naturally, you couldn't do that now.

Computer games have images 20 times better than those ancient programmes.

You could no more ask a child to enjoy them than swap his mobile phone for two cocoa tins and a length of string. So the sets are stunning, vast, vivid, three-dimensional. The Doctor still enters the police box (when did you last see one of those? ) but emerges into a fabulous, towering, terrifying, futuristic world.

Which is fine, except that science fiction demands, first of all, internal consistency.

The total freedom the writer enjoys comes at a price: he has to stick to the rules he has invented and the worlds he has created. 'Year 5 billion and 23, ' says the Doctor.

'Sun expands, earth gets roasted.' 'That was our first date!' replies Ms Piper, in one of many embarrassing lines that had me yelling at the screen that little jokes are fine, but only after you have firmly established your setting. Similarly, it's no good dispatching a sort of scuttling fluorescent Philippe Starck lemon squeezer to spy on Ms Piper, then having her remark 'would you Adam and Eve it!' ten minutes later.

And the plot. In the black-and-white past, monsters tried to take over the world, and the Doctor, with his plucky assistant, foiled their evil plans. It's a good story, the basis of half of all sci-fi (apart from the ones in which we humans are already zombie-slaves). This plot seemed to be about a hospital, which looked like a cross between a Dalek in a wedding dress and one of those American hotels in which the atrium stretches up to the 45th floor, run by nuns, who were actually giant cats.

There was a fat man called The Duke of New York who resembled Bernard Manning. Another character was a piece of skin with eyes, whose brain lodged in a jar nearby. At one point the Doctor and Ms Piper have a snog, sadly at the time her body has been taken over by an alien life form, which might remind her of when she was married to Chris Evans. Towards the end it turns out that the nun/cats have bred human beings and infected them with every disease known in the universe for research purposes. The Doctor frees them and cures them. Or the other way round.

Sliced down to that storyline, it would have made a good half-hour drama. As it is, it rambled self-indulgently all over the place, creating a plot that was difficult to follow and made you feel it probably isn't worth the effort.

Billie Piper is an attractive and resourceful actor. David Tennant, with those screen-filling eyes, is always compelling, especially in roles that require great self-confidence in difficult situations (see Blackpool and Casanova). Now someone needs to tell the writer, Russell T. Davies, to give each show in the next series some internal consistency, coherence and direction.