The nurse who earns more than the Doctor 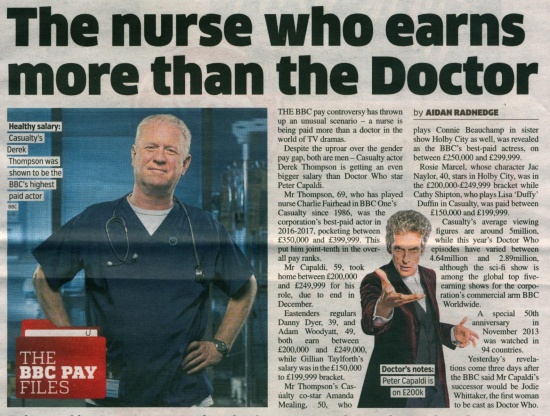 THE BBC pay controversy has thrown up an unusual scenario - a nurse is being paid more than a doctor in the world of TV dramas.

Despite the uproar over the gender pay gap, both are men - Casualty actor Derek Thompson is getting an even bigger salary than Doctor Who star Peter Capaldi.

He later posted on Twitter: 'We do get paid the same for breakfast. I have 2 jobs - I do Football Focus too.'

Ms Minchin's only online comments were joking about her own slip of the tongue when remarking: 'Only one third of the women on that list are women.'

Casualty's average viewing figures are around 5million, while this year's Doctor Who episodes have varied between 4.64million and 2.89million, although the sci-fi show is among the global top five-earning shows for the corporation's commercial arm BBC Worldwide.

A special 50th anniversary in November 2013 was watched in 94 countries.

Yesterday's revelations come three days after the BBC said Mr Capaldi's successor would be Jodie Whittaker, the first woman to be cast as Doctor Who.