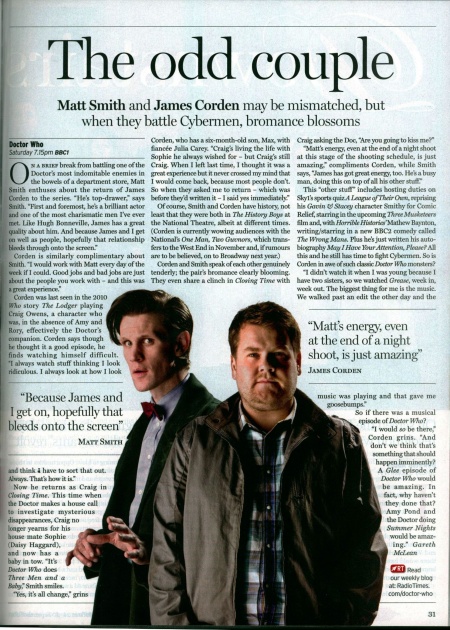 Matt Smith and James Corden may be mismatched, but when they battle Cybermen, bromance blossoms

ON A BRIEF break from battling one of the Doctor's most indomitable enemies in the bowels of a department store, Matt Smith enthuses about the return of James Corden to the series. "He's top-drawer," says Smith. "First and foremost, he's a brilliant actor and one of the most charismatic men I've ever met. Like Hugh Bonneville, James has a great quality about him. And because James and I get on well as people, hopefully that relationship bleeds through onto the screen:'

Corden is similarly complimentary about Smith. "I would work with Matt every day of the week if I could. Good jobs and bad jobs are just about the people you work with - and this was a great experience."

Corden was last seen in the 2010 Who story The Lodger playing Craig Owens, a character who was, in the absence of Amy and Rory, effectively the Doctor's companion. Corden says though he thought it a good episode, he finds watching himself difficult. "I always watch stuff thinking I look ridiculous. I always look at how I look and think have to sort that out. Always. That's how it is."

Now he returns as Craig in Closing Time. This time when the Doctor makes a house call to investigate mysterious disappearances, Craig no longer yearns for his house mate Sophie (Daisy Haggard), and now has a t baby in tow. "It's Doctor Who does Three Men and a Baby," Smith smiles.

"Yes, it's all change," grins Corden, who has a six-month-old son, Max, with fiancée Julia Carey. "Craig's living the life with Sophie he always wished for - but Craig's still Craig. When I left last time, I thought it was a great experience but it never crossed my mind that I would come back, because most people don't. So when they asked me to return - which was before they'd written it - I said yes immediately."

Of course, Smith and Corden have history, not least that they were both in The History Boys at the National Theatre, albeit at different times. (Corden is currently wowing audiences with the National's One Man, Two Guvnors, which transfers to the West End in November and, if rumours are to be believed, on to Broadway next year.)

Corden and Smith speak of each other genuinely tenderly; the pair's bromance clearly blooming. They even share a clinch in Closing Time with Craig asking the Doc, "Are you going to kiss me?"

"Matt's energy, even at the end of a night shoot at this stage of the shooting schedule, is just amazing," compliments Corden, while Smith says, "James has got great energy, too. He's a busy man, doing this on top of all his other stuff."

This "other stuff" includes hosting duties on Sky1's sports quiz A League of Their Own, reprising his Gavin & Stacey character Smithy for Comic Relief, starring in the upcoming Three Musketeers film and, with Horrible Histories' Mathew Barton, writing/starring in a new BBC2 comedy called The Wrong Mans. Plus he's just written his autobiography May I Have Your Attention, Please? All this and he still has time to fight Cybermen. So is Corden in awe of such classic Doctor Who monsters?

"I didn't watch it when I was young because I have two sisters, so we watched Grease, week in, week out. The biggest thing for me is the music. We walked past an edit the other day and the music was playing and that gave me goosebumps."