The play's the thing for Shakespeare Company 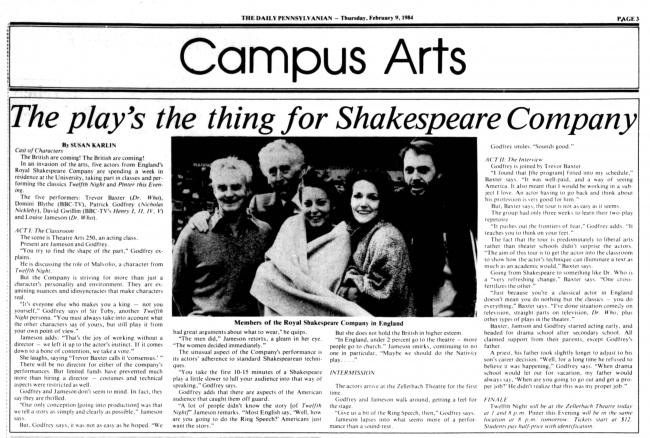 In an invasion of the arts, five actors from England's Royal Shakespeare Company arc spending a week in residence at the University, taking part in classes and performing the classics Twelfth Night and Pinter this Evening.

ACT I: The Classroom

The scene is Theatre Arts 250, an acting class.

Present are Jameson and Godfrey.

"You try to find the shape of the part." Godfrey explains.

He is discussing the role of Malvolio, a character from Twelfth Night.

But the Company is striving for more than just a character's personality and environment. They are examining nuances and idlosyncracies that make characters real.

"It's everyone else who makes you a king — not you yourself," Godfrey says of Sir Toby, another Twelfth Night persona. "You must always take into account what the other characters say of yours, but still play it from your own point of view."

Jameson adds: "That's the joy of working without a director — we left it up to the actor's instinct. If it comes down to a bone of contention, we take a vote."

There will be no director for either of the company's performances. But limited funds have prevented much more than hiring a director — costumes and technical aspects were restricted as well.

Godfrey and Jameson don't seem to mind. In fact, they say they are thrilled.

"Our only conception [going into production] was that we tell a story as simply and clearly as possible." Jameson says.

But, Godfrey says, it was not as sass as he hoped. "We had great arguments about what to wear," he quips.

"The men did," Jameson retorts, a gleam in her eye. "The women decided immediately."

The unusual aspect of the Company's performance is its actors' adherence to standard Shakespearean techniques.

"You take the first 10-15 minutes of a Shakespeare play a little slower to lull your audience into that way of speaking," Godfrey says.

Godfrey adds that there are aspects of the American audience that caught them off guard.

"A lot 01 people didn't know the story lof Twelfth Night!" Jameson remarks. "Most English say. 'Well, how are you going to do the Ring Speech?' Americans just want the story."

But she does not hold the British in higher esteem.

"In England, under 2 percent go to the theatre — more people go to church." Jameson smirks. continuing to no one in particular. "Maybe we should do the Nativity play... ."

The actors arrive at the Zellerbach Theatre for the first time.

Godfrey and Jameson walk around, getting a feel for the stage.

"Give us a hit of the Ring Speech, then," Godfrey says. Jameson lapses into what seems more of a performance than a .011nd-test.

Godfrey is joined by Trevor Baxter.

"I found that [the program] fitted into my schedule," Baxter says. "It was well-paid, and a way of seeing America. It also meant that I would be working in a subject 1 love. An actor having to go back and think about his profession is very good for him."

But, Baxter says, the tour is not as easy as it seems.

The group had only three weeks to learn their two-play repetoire.

"It pushes out the frontiers of fear." Godfrey adds. "It teaches you to think on your feet."

The fact that the tour is predominately to liberal art rather than theater schools didn't surprise the actors "The aim of this tour is to get the actor into the classroom to show how the actor's technique can illuminate a text as much as an academic would," Baxter says.

Going from Shakespeare to something like Dr. Who is a "very refreshing change." Baxter says. "One cross-fertilizes the other."

"Just because you're a classical actor in England doesn't mean you do nothing but the classics — you do everything," Baxter says. "I've done situation comedy on television, straight parts on television, Dr. Who, plus other types of plays in the theater."

Baxter, Jamson and Godfrey started acting early, and headed for drama school after secondary school. All claimed support from their parents, except Godfrey's father.

A priest, his father took slightly longer to adjust to his son's career decision. "Well, for a long time he refused to believe it was happening." Godfrey says. "When drama school would let out for vacation, my father would always say, 'When are you going to go out and get a proper job?' He didn't realize that this was my proper job."

Twelfth Night will be at the Zellerbach Theatre today at 1 and 8 p.m. Pinter this Bening will be in the same location at 8 p.m. tomorrow. Tickets start at 112. Students pay half-price with identification.

Caption: Members of the Royal Shakespeare Company In England