The prognosis for feminism is not good 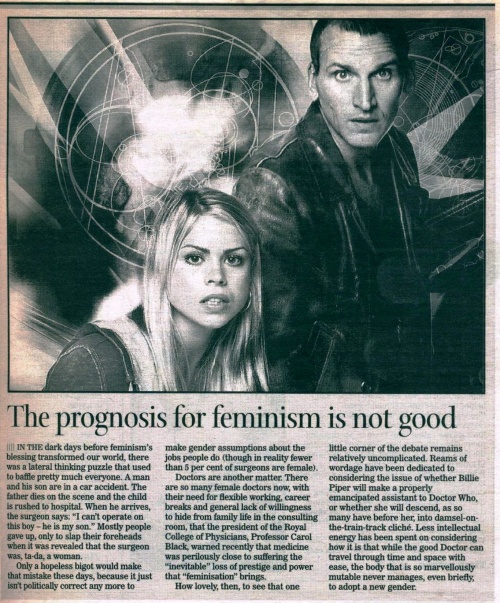 IN THE dark days before feminism's blessing transformed our world, there was a lateral thinking puzzle that used to baffle pretty much everyone. A man and his son are in a car accident. The father dies on the scene and the child is rushed to hospital. When he arrives, the surgeon says: "I can't operate on this boy - he is my son." Mostly people gave up, only to slap their foreheads when it was revealed that the surgeon was, ta-da, a woman.

Only a hopeless bigot would make that mistake these days, because it just isn't politically correct any more to make gender assumptions about the jobs people do (though in reality fewer than 5 per cent of surgeons are female).

Doctors are another matter. There are so many female doctors now, with their need for flexible working, career breaks and general lack of willingness to hide from family life in the consulting room, that the president of the Royal College of Physicians, Professor Carol Black, warned recently that medicine was perilously close to suffering the "inevitable" loss of prestige and power that "feminisation" brings.

How lovely, then, to see that one little corner of the debate remains relatively uncomplicated. Reams of wordage have been dedicated to considering the issue of whether Billie Piper will make a properly emancipated assistant to Doctor Who, or whether she will descend, as so many have before her, into damsel-on-the-train-track cliché. Less intellectual energy has been spent on considering how it is that while the good Doctor can travel through time and space with ease, the body that is so marvellously mutable never manages, even briefly, to adopt a new gender.