The punters queue for new Doctor Who 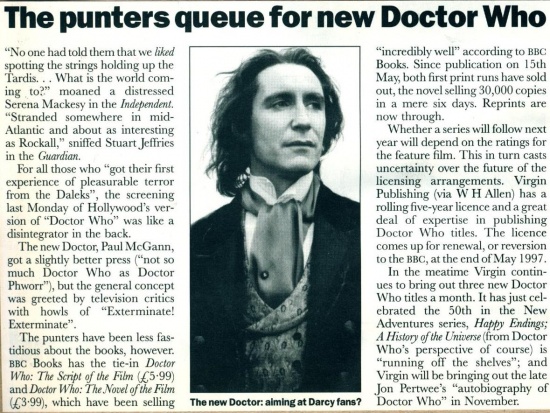 "No one had told them that we liked spotting the strings holding up the Tardis... What is the world coming tor moaned a distressed Serena Mackesy in the Independent. "Stranded somewhere in mid-Atlantic and about as interesting as Rockall," sniffed Stuart Jeffries in the Guardian.

For all those who "got their first experience of pleasurable terror from the Daleks", the screening last Monday of Hollywood's version of "Doctor Who" was like a disintegrator in the back.

The new Doctor, Paul McGann, got a slightly better press ("not so much Doctor Who as Doctor Phworr"), but the general concept was greeted by television critics with howls of "Exterminate! Exterminate".

The punters have been less fastidious about the books, however. BBC Books has the tie-in Doctor Who: The Script of the Film (£5.99) and Doctor Who: The Novel of the Film (£3.99), which have been selling "incredibly well" according to BBC Books. Since publication on 15th May, both first print runs have sold out, the novel selling 30,000 copies in a mere six days. Reprints are now through.

Whether a series will follow next year will depend on the ratings for the feature film. This in turn casts uncertainty over the future of the licensing arrangements. Virgin Publishing (via W H Allen) has a rolling five-year licence and a great deal of expertise in publishing Doctor Who titles. The licence comes up for renewal, or reversion to the BBC, at the end of May 1997.

In the meatime Virgin continues to bring out three new Doctor Who titles a month. It has just celebrated the 50th in the New Adventures series, Happy Endings; A History of the Universe (from Doctor Who's perspective of course) is "running off the shelves"; and Virgin will be bringing out the late Jon Pertwee's "autobiography of Doctor Who" in November.