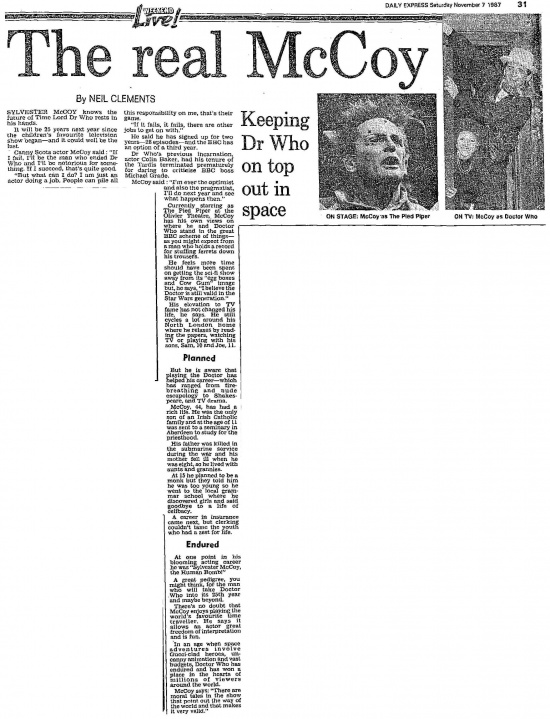 Keeping Dr Who on top out in space

SYLVESTER McCOY knows the future of Time Lord Dr Who rests in his hands.

It will be 25 years next year since the children's favourite television show began—and it could well be the last.

Canny Scots actor McCoy said : "If I fail, I'll be the man who ended Dr Who and I'll be notorious for something. If I succeed, that's quite good.

"But what can I do? I am just an actor doing a job. People can pile all this responsibility on me, that's their game.

"If it fails, it fails, there are other jobs to get on with."

He said he has signed up for two years-28 episodes—and the BBC has an option of a third year.

Dr Who's previous incarnation, actor Colin Baker, had his tenure of the Tardis terminated prematurely for daring to criticise BBC boss Michael Grade.

McCoy said : "I'm ever the optimist and also the pragmatist, I'll do next year and see what happens then."

Currently starring as The Pied Piper at the Olivier Theatre, McCoy has his own views on where he and Doctor Who stand in the great BBC scheme of things—as you might expect from a man who holds a record for stuffing ferrets down his trousers.

He feels more time should have been spent on getting the sci-fi show away from its "egg boxes and Cow Gum" image but, he says, "I believe the Doctor is still valid in the Star Wars generation." His elevation to TV fame has not changed his life, he says. He still cycles a lot around his North London home where he relaxes by reading the papers, watching TV or playing with his sons, Sam, 10 and Joe, 11.

But he is aware that playing the Doctor has helped his career—which has ranged from fire-breathing and nude escapology to Shakespeare, and TV drama.

McCoy, 44, has had a rich life. He was the only son of an Irish Catholic family and at the age of 11 was sent to a seminary in Aberdeen to study for the priesthood.

His father was killed in the submarine service during the war and his mother fell ill when he was eight, so he lived with aunts and grannies.

At 15 he planned to be a monk but they told him he was too young so he went to the local grammar school where he discovered girls and said goodbye to a life of celibacy.

A career in insurance came next, but clerking couldn't tame the youth who had a zest for life.

At one point in his blooming acting career he was "Sylvester McCoy, the Human Bomb!"

A great pedigree, you might think, for the man who will take Doctor Who into its 25th year and maybe beyond.

There's no doubt that McCoy enjoys playing the world's favourite time traveller. He says it allows an actor great freedom of interpretation and is fun.

In an age when space adventures involve Gucci-clad heroes, uncanny animation and vast budgets, Doctor Who has endured and has won a place in the hearts of millions of viewers around the world. McCoy says: "There are moral tales in the show that point out the way of the world and that makes it very valid."

Caption: ON TV: McCoy as Doctor Who