The regeneration game (The Stage) 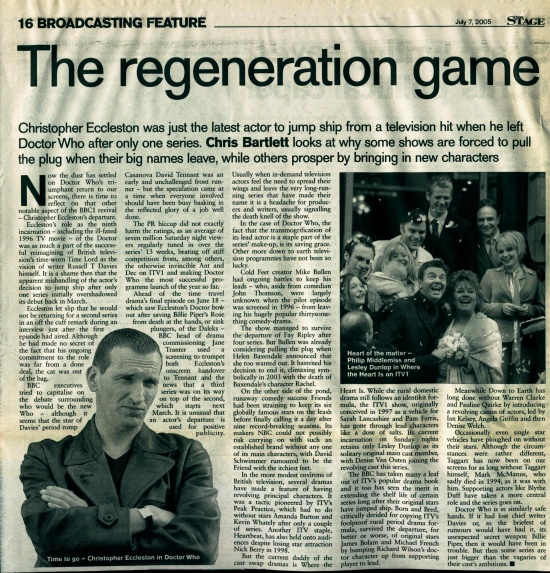 Christopher Eccleston was just the latest actor to jump ship from a television hit when he left Doctor Who after only one series. Chris Bartlett looks at why some shows are forced to pull the plug when their big names leave, while others prosper by bringing in new characters

Now the dust has settled on Doctor Who's triumphant return to our screens, there is time to reflect on that other notable aspect of the BBC1 revival — Christopher Eccleston's departure.

Eccleston's role as the ninth incarnation — including the ill-fated 1996 TV movie — of the Doctor was as much a part of the successful reimagining of British television's time-worn Time Lord as the vision of writer Russell T Davies himself. It is a shame then that the apparent mishandling of the actor's decision to jump ship after only one series initially overshadowed its debut back in March.

Eccleston let slip that he would not be returning for a second series in an off the cuff remark during an interview just after the first episode had aired. Although he had made no secret of the fact that his ongoing commitment to the role was far from a done deal, the cat was out of the bag.

BBC executives tried to capitalise on the debate surrounding who would be the new Who — although it seems that the star of Davies' period romp Casanova David Tennant was an early and unchallenged front runner — but the speculation came at a time when everyone involved should have been busy basking in the reflected glory of a job well done.

The PR hiccup did not exactly harm the ratings, as an average of seven million Saturday night viewers regularly tuned in over the series' 13 weeks, beating off stiff competition from, among others, the otherwise invincible Ant and Dec on ITV1 and making Doctor Who the most successful programme launch of the year so far.

Ahead of the time travel drama's final episode on June 18 —which saw Eccleston's Doctor bow out after saving Billie Piper's Rose from death at the hands, or sink plungers, of the Daleks —BBC head of drama commissioning Jane Tranter used a screening to trumpet both Eccleston's onscreen handover to Tennant and the news that a third series was on its way on top of the second, which starts next March. It is unusual that actor's departure is used for positive publicity. Usually when in-demand television actors feel the need to spread their wings and leave the very long-running series that have made their name it is a headache for producers and writers, usually signalling the death knell of the show.

In the case of Doctor Who, the fact that the transmogrification of its lead actor is a staple part of the series' make-up, is its saving grace. Other more down to earth television programmes have not been so lucky.

Cold Feet creator Mike Bullen had ongoing battles to keep his leads — who, aside from comedian John Thomson, were largely unknown when the pilot episode was screened in 1996 — from leaving his hugely popular thirtysomething comedy-drama.

The show managed to survive the departure of Fay Ripley after four series. But Bullen was already considering pulling the plug when Helen Baxendale announced that she too wanted out. It hastened his decision to end it, climaxing symbolically in 2003 with the death of Baxendale's character Rachel.

On the other side of the pond, runaway comedy success Friends had been straining to keep its six globally famous stars on the leash before finally calling it a day after nine record-breaking seasons. Its makers NBC could not possibly risk carrying on with such an established brand without any one of its main characters, with David Schwimmer rumoured to be the Friend with the itchiest feet.

In the more modest environs of British television, several dramas have made a feature of having revolving principal characters. It was a tactic pioneered by ITV's Peak Practice, which had to do without stars Amanda Burton and Kevin Whately after only a couple of series. Another ITV staple, Heartbeat, has also held onto audiences despite losing star attraction Nick Berry in 1998.

But the current daddy of the cast swap dramas is Where the Heart Is. While the rural domestic drama still follows an identikit formula, the ITV1 show, originally conceived in 1997 as a vehicle for Sarah Lancashire and Pam Ferris, has gone through lead characters like a dose of salts. Its current incarnation on Sunday nights retains only Lesley Dunlop as its solitary original main cast member, with Denise Van Outen joining the revolving cast this series.

The BBC has taken many a leaf out of ITV's popular drama book and it too has seen the merit in extending the shelf life of certain series long after their original stars have jumped ship. Born and Bred, critically derided for copying ITV's foolproof rural period drama formula, survived the departure, for better or worse; of original stars James Bolam and Michael French by bumping Richard Wilson's doctor character up from supporting player to lead.

Meanwhile Down to Earth has long done without Warren Clarke and Pauline Quirke by introducing a revolving canon of actors, led by Ian Kelsey, Angela Griffin and then Denise Welch.

Occasionally even single star vehicles have ploughed on without their stars. Although the circumstances were rather different, Taggart has now been on our screens for as long without Taggart himself, Mark McManus, who sadly died in 1994, as it was with him. Supporting actors like Blythe Duff have taken a more central role and the series goes on.

Doctor Who is in similarly safe hands. If it had lost chief writer Davies or, as the briefest of rumours would have had it, its unexpected secret weapon Billie Piper, then it would have been in trouble. But then some series are just bigger than the vagaries of their cast's ambitions.

Caption: Time to go — Christopher Eccleston in Doctor Who

Caption: Heart of the matter —Philip Middlemiss and Lesley Dunlop in Where the Heart Is on ITV1