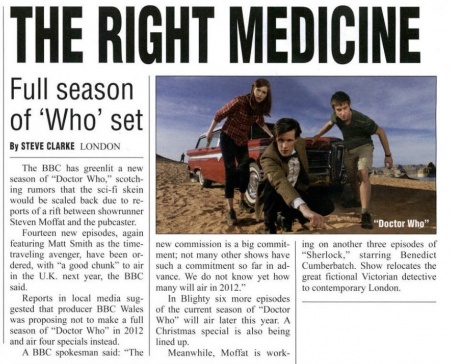 The BBC has greenlit a new season of "Doctor Who," scotching rumors that the sci-fi skein would be scaled back due to reports of a rift between showrunner Steven Moffat and the pubcaster.

Fourteen new episodes, again featuring Matt Smith as the time-traveling avenger, have been ordered, with "a good chunk" to air in the U.K. next year, the BBC said.

Reports in local media suggested that producer BBC Wales was proposing not to make a full season of "Doctor Who" in 2012 and air four specials instead.

A BBC spokesman said: "The new commission is a big commitment; not many other shows have such a commitment so far in advance. We do not know yet how many will air in 2012."

In Blighty six more episodes of the current season of "Doctor Who" will air later this year. A Christmas special is also being lined up.